No Cheers for the Bailout: Ron Paul Interview 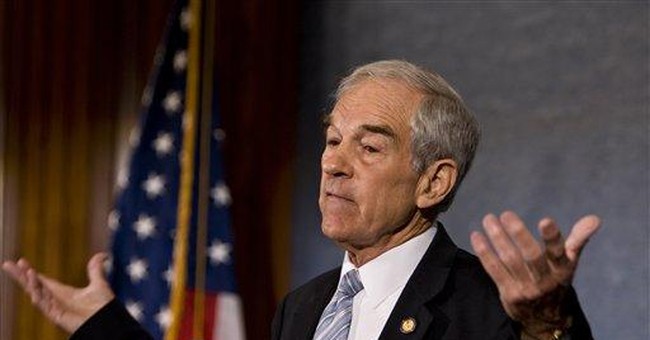 You can't pin any blame for the country's financial meltdown on Congressman Ron Paul. The libertarian Texas Republican and former Pittsburgher has been warning for two decades about the unhappy -- and inevitable -- economic consequences of a loose monetary policy, fiscal irresponsibility and too much meddling in the marketplace by the federal government.

Not surprisingly, Rep. Paul says he is "positively opposed" to what he calls the Bush administration's "slipshod" $700 billion bailout plan. As Paul warned the House of Representatives Wednesday, "Our economy faces a bleak future, particularly if the latest $700 billion bailout plan ends up passing. We risk committing the same errors that prolonged the misery of the Great Depression, namely keeping prices from falling."

I talked to Paul by phone from Washington early Thursday evening as the Beltway political powers were still meeting and trying to agree on how to fix the problem they are largely responsible for creating.

Q: I suspect we won't hear you cheering about the bailout -- or "The Rescue" -- as they are trying to call it?

A: No way. I think that it's just going to bring more problems. You can't stop a problem of too much spending and too much deficits and too much monetary inflation with more of it. So I’m positively opposed to the bailout and believe it will just delay the correction that is required. We need to correct the imbalances and if you interfere, you just delay it and make it more difficult and make the problems worse for ourselves.

Q: Do you think he is telling the story as straight as he should be or is he glossing over some things?

A: Well, I’m sure he’s glossing over. I imagine he believes what he’s saying. But you know I was just on the (House) floor and a couple other members came over and showed me some articles and letters they’ve received. One was from a banker who’s involved with 1,500 banks in the South. He was positively opposed to the bailout. He said, “Why punish all of us when just a few people have really messed up?” Someone else came along with a chart that showed that credit has not frozen up and that there’s as much credit available in the last couple weeks as there was in the last six months. So that means the (bailout supporters) are working on some propaganda to sort of frighten members of Congress into voting for it. If you don’t vote for it, and there’s a problem, then you’re going to be blamed for it.

Q: Is this truly a national crisis? So many of national crises really are regionalized or localized problems.

A: I think of it as a crisis. I've been talking about it for a long time and have said we will have a financial disruption and an attack on the dollar. But I think the way they are talking is that if you don't pass it this weekend then by Monday the market might go down 10,000 points. I think it's not that type of crisis, but I think it's very significant that if we continue our ways we'll eventually destroy the dollar. Yet what they are doing is bringing that on because they are doing the wrong thing.

Q: You pin most of the blame for this crisis on government.

A: Oh yeah. More specifically, the Federal Reserve. (It's) responsible for the booms and the busts. You can't have this type of a boom cycle without a Federal Reserve and a central bank and it can be bounded with other parts of the government. Legislation might push an excessive amount of money into certain areas in addition to the easy-money system, and that's what I think happened. There were these affirmative action programs where banks were literally encouraged or told they had to make bad loans. The Community Reinvestment Act tells them they can be fined a lot of money for denying loans that are risky. It's sort of ironic.

And if one looks at the total problem of inflation, in which prices go up because of the increases in the money supply, certain areas go up much faster than others. So medical care and education and houses went up much faster but then there has to be corrections. They get out of whack and these prices have to come down. So we see the correction and the sooner you get the prices down, the better it is for everybody.

Q: From what I understand the major problem goes back to housing, housing, housing. Home prices were inflated and now the bubble has burst and you argue that prices should be allowed to fall to whatever their real level should be and not be propped up by a federal bailout.

A: That's right, and I accuse (Federal Reserve Chairman Ben) Bernanke of being a price-fixer. He wants to buy these illiquid assets and keep the price up and they may be worthless. So they want you to limit your thinking to the immediate problem -- the downturn in the housing market. But they don't want to talk about who caused the upturn and the excesses in the housing market -- and that was government. They don't talk about the cause. They just say, "We're here now. What are we going to do about it?" In medicine, you can't really treat a disease very well if you don't know the exact cause.

A: So where's all this money going, huh?

A: Propping up derivatives; that's the scam. It's the so-called "illiquid assets." I think that's a misnomer. I think it's "worthless assets" that are being bought up so some of these big guys don't get wiped out.

Q: You say a $700 billion bailout is only a temporary fix.

A: Yeah, it is. If you come to the conclusion that you have to liquidate debt, the faster you get it over with the sooner the economy goes back to work. So they're propping up the prices artificially on houses and at the same time they are saying, "How can we stimulate housing growth?" Well, there are too many houses. You want the supply and demand of houses to adjust, so you let the prices of houses come down and let the houses get in the hands of people who really want them and can afford them and you quit building houses for a while.

So, yeah, you have a booming economy when you deceive the people and you stimulate the economy with easy credit. But you've got to make up for it eventually, and that's the part that nobody likes. We have prevented any attempt at correction essentially over the past 20 years. So we have a bigger bubble than ever before, which means we'll have a bigger correction than ever before. So the only question is, should it be a short, tough correction or a very long, tough correction?

Q: What is your solution for avoiding this kind of sudden national emergency?

A: You need to allow a liquidation of debt, which means bankruptcies. You should treat it like Lehman Brothers -- let them go broke and the good assets will be bought up. But you should restore confidence and encourage business activity. It isn't a lack of regulation that was the problem, it was the lack of the market being allowed to work.

We don't need more Sarbanes-Oxley (financial reporting) regulations like those that came out of Enron. But we should assure the markets that we are going to live within our means. I think the federal budget ought to be balanced. You could do that rather quickly by changing our foreign policy. But people aren't quite willing to give up the welfare-warfare state. But if you did that, things could come back very quickly.