Bill Palmer
|
Posted: Aug 06, 2019 5:00 PM
Share   Tweet
The opinions expressed by columnists are their own and do not necessarily represent the views of Townhall.com. 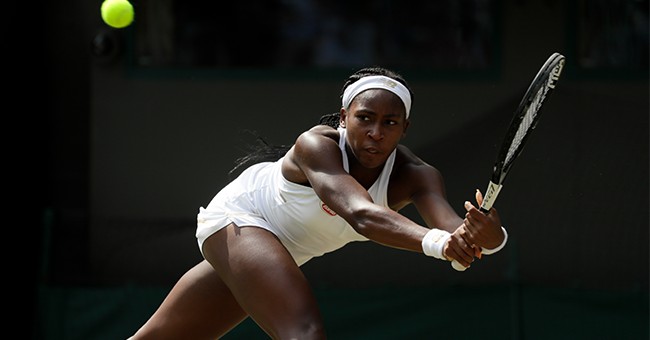 It was a parent’s dream: 15-year-old American prodigy Cori “Coco” Gauff blazed her way through her Wimbledon debut, beating Venus Williams and becoming the youngest player to reach the last 32 at Wimbledon in nearly three decades.

She could have cried and hung her head. But instead she ended her run with grace. “I learned a lot,” she told The New York Times. “I still tried my best.”

It’s not Coco’s wins that kids, parents and communities – especially churches – should be paying attention to; it’s her losses. How a player behaves when she steps off the court, especially when things haven’t gone as planned, is often more important than her performance on the court. And Coco Gauff certainly handles loss right.

Her parents have done plenty of things right too. They’ve taught her to have a good presence and good body language on the court. They’ve encouraged her without demanding perfection; as child development expert Dr. Deborah Gilboa explains, we need to “tell our kids we believe in them, and still allow room for failure and improvement.”And it was also Coco’s parents who taught her to pray before every match – not about winning, but that she and her opponent stay safe.

Faith, in fact, has an important and often underrated role to play in sports. The lessons kids learn in church – humility, integrity, leadership, conflict management – are often just as applicable on sports fields as they are in the pews. Churches can be a valuable place for young people to learn a healthy attitude toward sports.

Most children won’t win a spot at Wimbledon at age 15, or ever, for that matter. What they can win, instead, if we approach sports right, are new relationships with peers, a healthy competitive spirit, a sense of right and wrong, and a love of the game. Playing sports should not just be about improving a child’s physical abilities. It should also be about mental, social and spiritual development.

Church communities can be influential in leveraging the power of sports to help kids connect with their faith and with other families in their community. This involvement is more important now than ever. As the culture of kids’ sports has gotten more aggressive, competitive and perhaps overly elevated, we need to re-emphasize the importance of positive sportsmanship and proper perspective.

The New York Times reported last year that burnout in youth sports is becoming an increasing concern, noting that many parents today are encouraging year-round training in one sport, with “notions of… professional glory often [dancing] in the backs – or fronts – of parental minds.” Moreover, the article notes, most current Division I college athletes and professionals did not actually begin specializing at early ages. Those who do are far more prone to injury.

If we take the view that sports is an opportunity to build our children’s character – instead of a route to a college scholarship – we’ll be teaching them lessons that will last a lifetime, not just the duration of their time in the sport.

Coco Gauff began playing tennis at age seven – four years older than the age at which most tennis centers begin offering lessons. And while her discipline and commitment to the sport over the past eight years is admirable, what we should take away from her Wimbledon journey is that success does not always mean super-stardom. Coco may have a bright future ahead of her; but if her parents taught her well, which it seems they have, what remains after it all goes away will be the most important win of all.