Bill Murchison
|
Posted: Sep 25, 2018 12:01 AM
Share   Tweet
The opinions expressed by columnists are their own and do not necessarily represent the views of Townhall.com. 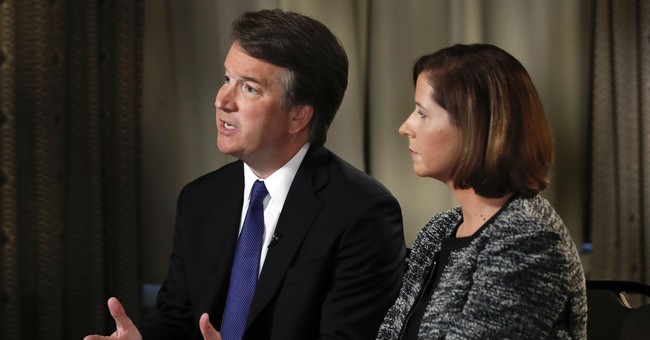 I think Dr. Christine Ford is blowing smoke and, further, that Judge Brett Kavanaugh is the moral superior of thousands who discount his word and declare him unfit for the Supreme Court.

But what do I know? What does Sen. Mazie Hirono, for that matter, know in spite of all her multiple testimonies to Ford's truthfulness? It's not a case of what we see with actual eyeballs. It's a case of what our innards tell us. This makes the battle over the Kavanaugh nomination to the court so potentially catastrophic – not to mention ironic, coming as it does at a moment of growing collective horror over the lynch-mob murders of black Americans in the late 19th and early 20th centuries. It's okay to revile mobs with nooses – mobs with microphones and Twitter accounts, not so much.

The world's leading democracy is heavy into the mob rule ethic. Can't you hear it? We got all the evidence we need, boys! That feller wouldn't be settin' up such a ruckus if he warn't guilty -- y'reckon? No last words for him; he can tell it to Jesus.

Twenty-first-century America's failure to understand itself as a mob-rule society in utero probably has something to do with the indifferent or dismissive way U.S. history is often taught these days. At the same time, we can't overlook the tribalism – more first-century than 21st – into which the country is descending. As the perceptive Andrew Sullivan, a moderate liberal, writes: "There seem to be just two unalterable categories: the oppressors or the oppressed; elite globalists or decent 'normal' people. You are in one camp or the other ...."

That is, you're against the debasement of women, or you're a debaser yourself. And if the latter, you're invited to a party different from the kind Ford claims to remember. There's no rope – yet –but public disrepute leaves its own mark on the neck.

A mob-rule society, we're going to figure out one of these days, isn't a society at all. Such rights as it allows are precisely the rights that pertain to those who dominate or intend to -- those with the loudest voices and the most fashionable ideas. To those lacking these attributes go none of democracy's suppositions, such as the right to be heard or even the right to an opinion of one's own. These folk do as the mob says. They repeat and vow what the mob tells them to repeat and vow.

Such questions should trouble us mightily, beyond the question of who gets to sit on the Supreme Court.

Finish off Kavanaugh with the weapons of unmerited public shame and guess what precedent we set? Let's see: Somewhere down the line, President Mazie Hirono or Cory Booker or Elizabeth Warren names Judge X to the high court. The propaganda machines start to grind. Judge X – why, why, she walked the streets to pay for law school, when she wasn't drunk! It's coming. You can smell it.

As with judicial nominations, so it is with other claims to honor. Proof? Who needs proof? The truth isn't what we seek. Victory is what we seek: victory over those opposed to our ideas and our ideals.

Ugliness of spirit is what mob rule breeds, quite apart from the violence of one kind or another that it inflicts on the unpopular and disliked. Brett Kavanaugh's foes in politics and the media may get away with this escapade. The many-throated mob may lynch him without credible evidence of bad behavior.

So much for due process of law, if the mob has its way. So much, also, for any restoration of civility in public life. The smoke from the bonfire will darken American skies for a long time to come. We'll get meaner and meaner on all sides and more dangerous to democracy than we are right now. Dr. Christine Ford, Sen. Dianne Feinstein, Sen. Mazie Hirono -– they won't be forgotten. They'll be remembered in the worst way: as symbols of unfairness, of disdain for reason and, yes, of rule by the mob.

Murchison is writing a book on American moral restoration in the 21st century. His latest book is "The Cost of Liberty: The Life of John Dickinson."