The President Is Right

Bill Murchison
|
Posted: Oct 03, 2017 12:01 AM
Share   Tweet
The opinions expressed by columnists are their own and do not necessarily represent the views of Townhall.com. 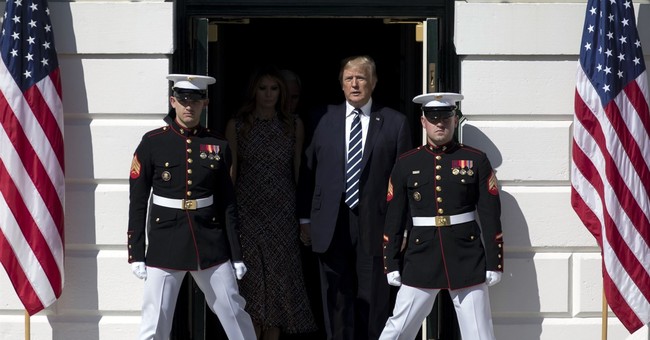 Some may confess to the need for smelling salts subsequent to discovering that Donald Trump has spoken the plain, unvarnished truth about the Las Vegas massacre.

The truth he spoke is one the world needs to receive with gratitude, in spite of the engrained disposition to treat Trumpian declarations as stink bombs.

"It was an act of pure evil," Trump said of the massacre. Bull's-eye, Mr. President!

The E-word, then -- "evil." We are not unacquainted with it in our rancorous age. We rarely, nonetheless, hear it applied in the context to which it properly belongs: wherein man is a great deal less than the measure of all things; and worthy aspirations crash, while bad ones flourish; and hatred tries to stamp out love; and the talking snake of Eden blinks a satisfied eye.

Not to see the world as a place of contention between evil on the one hand and good on the other hand is not to see the world. Our ancestors saw it so, but that was a while back -- three centuries or more, before theology lost its hold on the intellect and humanity began claiming for itself the right, as well as the ability, to redefine the terms of human life. Evil, once a lively presence in human affairs, became a handicap certain to vanish as soon as everyone could vote and enjoy three square meals a day.

The devil's imputed influence on human affairs became laughable to the well-educated and rational. Ho, ho -- boy in a red suit with pitchfork. What a joke. Pre-K school, no-calorie snacks and paid maternal leave would take care of him all right. We were physical creatures, it appeared. Our bodies counted: not much else. Certainly not our souls, if any. The "God of Our Fathers," with his "almighty hand," as the national hymn puts it, lost his seat at the head of affairs. Evil? We'd take care of it, thanks, old boy: with better lighting, free Kindle readers, "safe spaces" for the troubled.

For gun violence, the answer is gun control? Seems that way, from accounts of the massacre, on the supposition that the key factor was the weapons used, rather than the disposition to use them. And where could that disposition have come from? Maybe personal detachment from divine principles of love and mercy had something to do with it. Maybe personal attachment to malice and suffering. Maybe both at the same time: in combination so deep that the best and biggest gun control law ever passed could not have averted the outcome.

"It was an act of pure evil." We should reckon with that possibility. And what would that mean -- reckoning with the possibility that some fury could bubble up, foreign to sociologists, psychologists, and -- most of all -- politicians, with their love of pleasing and soothing? Logically, it might mean we were barking up the wrong tree, blaming bad influences and substandard conditions for the desire to kill. It might mean, in a complementary sense, we had to find the right tree for barking purposes.

Speaking of trees, one such in the Book of Genesis might warrant interest: the tree of the knowledge of good and evil, as it was known. Adam and Eve were camping there, reportedly, when into their lives, and the life of the world, slid that conniving snake.

At this whole vaporous business many moderns are sure to cry: "What?! Adam? Eve? Tree? Snake? Myth! Foolishness! Get outta here with the whole shebang!" Why? So that the media and the politicians and the sociologists may explain the Vegas massacre as a result of lax gun control?

We can try it that way -- passing law after law, awaiting the consequences of believing that lack of government constraint explains Las Vegas; and the Pulse nightclub in Orlando; and Emanuel African Methodist Episcopal Church; and Sandy Hook Elementary School.

Alternatively, we might give an ear to Donald J. Trump's jarring advice, and "pray for the day when evil is banished and the innocent are safe from hatred and from fear." Which you must admit gives a new and intriguing coloration to an old and forehead-thumping perplexity.