Hillary Clinton and the 'Homophobes'

Bill Murchison
|
Posted: Sep 13, 2016 12:01 AM
Share   Tweet
The opinions expressed by columnists are their own and do not necessarily represent the views of Townhall.com. 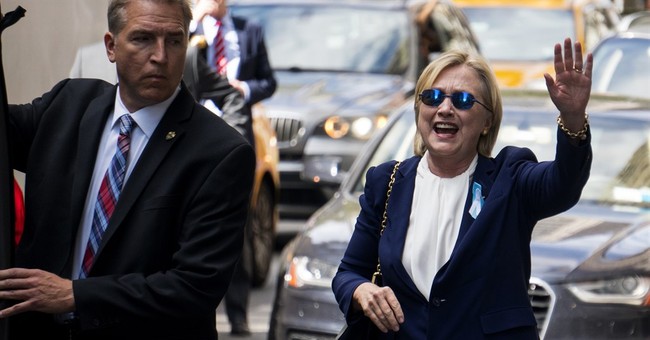 Say, do you think she might have to drop out of the race if she's as sick as she looked on this Sept. 11 in Manhattan?

I understand the question. However, something more than the obligations of Christian charity militate against wishing for such an outcome.

The first deterrent to this wish-fulfillment is Hillary Clinton's iron determination to take the place in history she long ago assigned herself -- Napoleoness extraordinaire, remaking the world's encrusted outlooks, overhauling its out-of-date prejudices. I think the mortician would have to chain her down to make her subside. Even then she might not.

Equally to the point, Hillary Clinton typifies, in spades, the modern Democratic Party. No one more normal than she could obtain the party's nomination today.

The party of Truman and LBJ, and of the original Clinton in this deal, is the party of Harry Reid, Elizabeth Warren, Nancy Pelosi, Sonia Sotomayor, Black Lives Matter, the LGBT caucus, the anti-coal and anti-oil lobby, the teachers unions, NARAL Pro-Choice America, and The New York Times editorial page -- among other fierce, uncompromising spirits bent on turning an older, generally unsatisfactory America into a congeries of do-it-our-way power centers.

Which, I grant, is a mouthful. It takes a mouthful just to enumerate the dislikes the party holds close to itself. They have a whole "basket of deplorables," as Clinton herself put it (notably, at an LGBT fundraiser): "the racist, sexist, homophobic, xenophobic, Islamophobic -- you name it," who she says make up "half of Trump's supporters."

You're a bad, bad person in Clinton's book if you question the agenda of today's Democratic Party: which is to make all of America mind its manners. There will be no criticism of the following: affirmative action; preference for the random victims of officer-involved shootings over the police themselves; eradication of ancient understandings of marriage; contempt for such benighted souls as insist that immigration laws be enforced; banishment of fears concerning a religion, some of whose adherents go around massacring the innocent.

It takes an industrious party to assemble such a swarm of enemies and a dedicated presidential candidate (they've got that, all right) to give these antagonisms punch.

Well, it's Richard Nixon's fault. We all know that. It was Nixon who began siphoning off to Republicanism the Democratic conservatives and moderates who once kept the party liberals (now called "progressives") more or less in line. A few moderates -- I haven't heard of any conservatives lately -- remain in Democratic ranks, but not enough to tame the party's general animus against local rights, capitalism, traditional moral norms and foreign policy that recognizes and seeks to counter real, live enemies of democracy and freedom.

Such is the party that nominated Hillary Rodham Clinton for the presidency. Care to bet its leaders doubt her commitment, real or put-on-for-the-occasion, to the Progressive Cause? They would tolerate nothing less in a leader. No more Scoop Jacksons or Mike Mansfields, as in days of yore. "Stick it to the homophobes" is the ticket.

Clinton's disability invites the voting public to look at what she stands for: not least for a party-wide attitude of disdain for people who think differently than Democrats think. They're the kind of people you can't and don't want to work with. Which means, just let her get elected and see what the party of Clinton (overlapping as it does the party of Obama) has to say about fracking or same-sex bathrooms or immigrant rights or any of the rest of the stuff the party of Trump seems to believe is at the very least worth discussing for the sake of attaining, where possible, a possible consensus.

The party of Trump isn't in such great shape itself, thanks to the vices and weaknesses of a candidate with a gift for disunity. It's possible that Clinton will bring off the unity business for Trump at below union rates by alarming the voters Clinton claims to find outrageous and unworthy. It is as I was saying (or if I wasn't, I should have been): Some campaign! Some mess!