Bill Murchison
|
Posted: Mar 22, 2016 12:01 AM
Share   Tweet
The opinions expressed by columnists are their own and do not necessarily represent the views of Townhall.com. 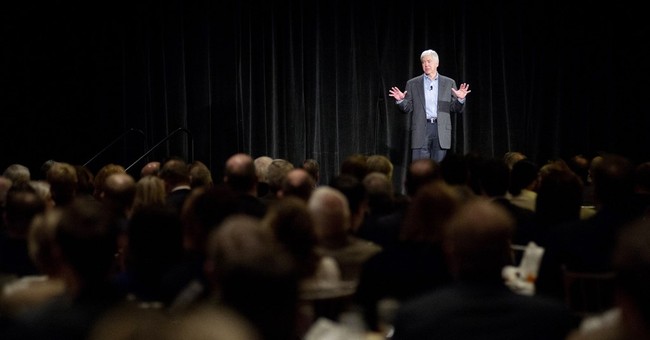 Trending
As no one else seems to know what's going on, or what to do about it, I make so bold to suggest that Republicans are approaching a Butch Cassidy moment.

We all remember Butch and Sundance, cornered on a cliff, debating whether to fight their pursuers or jump into the rapids 50 feet below. Sundance can't get with the jumping program. He can't swim. A minor point, Butch suggests: "The fall will probably kill you!" And away they go -- off the ledge, into the water. "Oh, s---": immortal words of counsel and warning for a party as divided as the GOP over how to defeat Hillary Clinton while keeping both its dignity and its soul.

An influential Republican segment wants to fight it out and spurn Donald Trump, the presumed GOP nominee, and Clinton, the certain Democratic nominee. Maybe a third party could be formed, with Rick Perry or former Oklahoma Sen. Tom Coburn holding high the standard of responsible conservatism.

Fie and phooey. I say so in my capacity as a founding member of the Aghast Brotherhood in political commentary: unable, from the moment our friend Donald first spouted off concerning his greatness, to see anything but mischief ahead. Trump may be the worst presidential prospect we have seen in decades -- except for Hillary Clinton. Anyone who gets the willies from thinking of Trump in charge at the White House should spare a thought for the prospect of Clinton sitting there, packing the Supreme Court, busting the budget, dithering in the fight against ISIS, portraying herself as queen of the universe.

The philosophies (so to speak) of the two candidates may differ in some degree. But a common outlook joins them: "It's all about ME! Yes, wonderful, indispensable ME!"

So far what I've said can't count as advice to vote for Trump. We are not yet at that fearful Kid-and-Butch moment (which the intrepid pair, you'll recall, managed to survive). Who or what might prevent such a disagreeable choice? A "brokered" convention? It is hard to see Ted Cruz or John Kasich slipping past Trump in that way. Neither one is exactly Mr. Popular with voters. Cruz in particular, with his limited appeal to non-conservatives (as well as to conservatives who find him dogmatic), is hard to imagine at the top of the ticket. And he would be even less likely to make it there should an outraged Trump go to war with him.

That brings up the matter of the third party that so-called "establishment Republicans" such as William Kristol are touting. Who would volunteer for the suicide mission of heading that party's ticket? Would Perry? Would Coburn? There are pleasanter ways of dying than by falling on one's sword for ambiguous aims such as Reconstituting Republican Conservatism.

If Ross Perot couldn't make a third party effort work, is Rick Perry, say, likely to enjoy success against the eviscerating machine known as Trump? The main thing a third party would do is throw the election decisively to Clinton: an outcome for which I daresay not many public figures would care to answer at the Dreadful Day of Judgment.

What to do, then, short of leap from the cliff? One thought occurs to me: Attempt a deal with Trump himself, whose ego won't endure a defeat at Clinton's hands. He couldn't save himself in that event, far less the world.

The Republican establishment needs to quit tearing its hair out (however much of it remains) and begin reaching out to Trump with counsel, ideas -- and money. The candidate stands in need of policy advice. Give it to him, plenteously. Don't offer to take over his operation (a gesture that would hardly work). Offer to help make his initiatives efficient and achievable. He stands in dire need of what we might call respectable company, Ben Carson's recent accession to that circle notwithstanding.

Would Trump consent to have his nose wiped and his nails trimmed? I don't know. Do you know? It seems logical. And he lays claim to world-class brains. Don't those brains tell him he can't win -- far less govern -- on instinct alone? Outreach and reparation should, in any case, be attempted. The posse is coming, and the rapids roar. "Oh ... !"