What? Another 'Conversation About Race'? 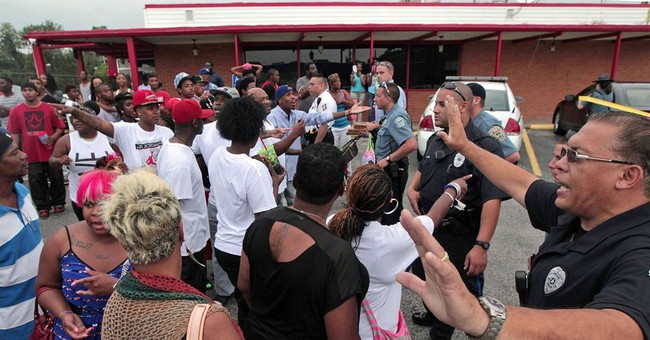 "Race," you said? A "national conversation" about race and the variant understandings and byplays that result from our differences? A sit-down in front of the cultural mirror to inspect the origins of community anger, as reflected in riots and police shootings? A talk about -- let's get down to it -- Ferguson, Missouri?

The media are beating that drum, with accompaniment from the White House, where the nation's first black (if you like, mixed-race) president held a cabinet meeting Monday, with follow-up gatherings involving parties interested in this sort of thing. The non-indictment of Officer Darren Wilson, and the ensuing riots, have set the nation up for an intensive examination of, as usual, white racism.

It is easy to predict on the basis of experience, that the conversation, if actually launched, will peter out after observance of the established formalities. The New York Times will highlight the failure of whites to acknowledge that -- to quote Times columnist Nicholas Kristof -- "racial bias remains deeply embedded in American life." Self-deputized spokesmen for blacks will lay out evidence about the economic and educational gap between the races, and about racist cops who take target practice on black males. America's increasingly upward-bound population of Asians and Hispanics will pay attention for about five minutes before turning to more rewarding pursuits, such as earning a living. White devotees of the New York Times line on race will nod or shake their heads depending on the rhetorical stimuli. The great majority of whites will murmur something akin to: Huh?

That would be the Times' point; to wit, whites don't understand the ongoing need to liquidate the legacy of slavery, as evidenced in the varied discrepancies between white performance and black performance.

The pitiful thing about this white racism trope, so assiduously pursued by the media, is its -- I would say irrelevance just as much as falsity. Dedicated to the proposition that whites "don't get it" about the racial problem, liberals of different hues, not just black but white, fiddle around with reactionary notions redolent of the ol' plantation, where Massa used to set the tone.

Disproportionately black public schools, with teaching staffs of dubious quality, no longer cut the pedagogical mustard? Genuine reformers reply: Give the kids a ticket out of that ghetto; let them, at state expense, choose better-performing schools, public or private. Cue, at that point, the fits that teacher unions and their liberal supporters throw at the idea of Abandoning Public Schools, no matter how much in need of overhaul and reform.

If 60.2 of whites and only 55.2 percent of blacks currently have jobs, would it not make sense to create more jobs -- for all comers -- through the relaxation of regulations and the lowering of tax rates that combine to keep unemployment unnaturally high? Take the Keystone pipeline. Better yet: (SET ITAL) Build (END ITAL) the pipeline; lay on the workers, with their paychecks and spending power. Yet the Obama administration sucks up to the white environmentalists who want neither pipeline nor pipeline jobs.

The case of Ferguson is unquestionably tragic. Shall I note another tragic element? The collapse of the black family, as foretold by Pat Moynihan half a century ago: mothers and babies left to fend for themselves by fathers not overburdened with moral sensibilities, but largely deprived of the pride and the self-restraint historically taught in the family structure. A possible counter-move on society's part? The revival of moral and religious witness in society at large: the deliberate affirmation -- in schools, at home, in entertainment, everywhere -- of moral truth as a social good to be grasped and held tight to young chests, for embedding in the heart.

But, no; white liberals grow nervous at the notion of exalting universal norms over the intuitions of individuals whose free choice in lifestyles must be affirmed. Until they end up on Action Central News. "Rioters protesting a grand jury action attacked police cars and burned and looted stores in the neighborhood where a white policeman, contending his life was in danger, shot and killed a black teenage hoodlum." A good conversational starter, you might say -- if we ever decided truly to converse.