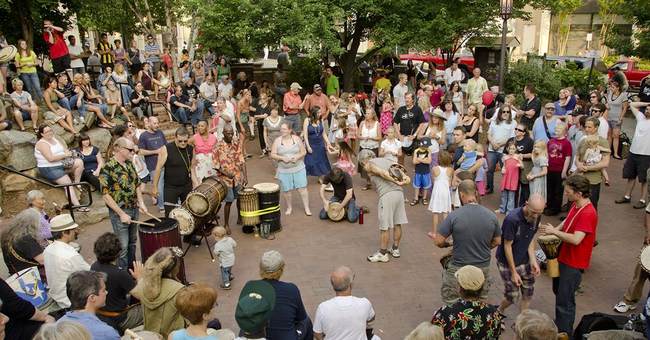 As the Russians push their imperial agenda in the Ukraine, and Western leaders wring their hands, the '70s come painfully to mind.

I bring up the '70s -- of god-awful memory -- as much to nourish hope as to enlarge perspective on current events in the world and the nation along with it.

As the hearing-aid set -- of which your servant is a certificate-holding member -- will recall, the '70s began with the U.S. in decline, at home and abroad. Inflation and fast-rising energy costs looked uncontrollable. The Nixon administration's response was wage-price controls -- an expedient never successful anywhere. A long, bloody, divisive and essentially futile war in Southeast Asia was winding down. It remained only to negotiate our exit costs.

In this environment of American weakness and confusion, enemies pounced. The Iranians seized our embassy in Tehran. The Russians invaded Afghanistan.

The cycle of decline and fall was arrested, and then reversed, in the '80s. Having seen what didn't work in foreign policy -- American guilt, American disengagement -- America, during the Reagan presidency, re-engaged. And, having done so, won the Cold War. In economic terms, the government stepped back, cut tax rates, eased various regulations and returned to the free marketplace some of its old-time flexibility. Things began working again.

They worked, that is, until "the thing that hath been" cruised back by the crime scene to test the shortness of our memories. Sure enough, around the year 2008, circumstances found the U.S. largely immobilized by the experience of war and the mistakes that seem to go with freedom and prosperity.

Under the guiding hand of Barack Obama, the old policies came back -- guilt, disengagement from responsibilities, pessimism as to American ideals and capabilities, resentment of economic success; a variety of mannerisms and anxieties that predict bad decision-making at the top.

Barack Obama, whose approval ratings fell last week to their lowest ever, is, seemingly, the new Jimmy Carter -- a man with few ideas other than to embody the reverse of what he sees as having caused our problems. Obama, like Carter, prior to the Afghan invasions, thought he could do something about American bossiness by disengaging from confrontation with other nations. We're not supposed to throw our weight around anymore. We're to act in concert with "the international community," whatever that is. We make noises, draw "red lines," issue warnings.

As in the Carter days, the government thinks it knows more than the citizens when it comes to economics. A government takeover of health care, tighter regulation of coal-fired plants, more government spending (except for defense), neglect of problems with Medicare and Social Security -- in this manner we create prosperity. Except when we create less prosperity and more prolonged misery.

The '70s of the last century look more and more like a dress rehearsal for the '10s of the 21st century: the same love of ideology over experience, the same wrong answers. Barack Obama has an evident gift for seeming indecisive in the face of challenge, which makes him look like the same patsy the Russians and the Iranians took Jimmy Carter to be.

The same love of government control that Jimmy Carter displayed keeps the American economy on its backside when the need of the day is to coax the animal spirits of the marketplace back into action.

It's saddening and discouraging to watch the '70s gaily gallivanting among us. There's more to say on that count, nonetheless. We cannot recall the badness of the '70s without recalling the good that flowed from the discovery in the '80s that things had to change. That's the first step: disillusion, and then the itch for hope and change. Didn't someone once tell us about that itch?