Climate Change and the Liberal Mind 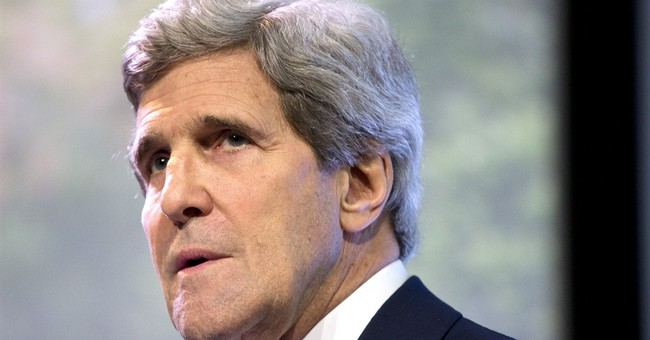 Gee. Gosh. And my, oh, my, as my grandmother might have exclaimed in wonder and awe.

All we need to know about global warming is what John Kerry tells us? In Jakarta over the weekend, our secretary of state exposed the irrelevance and blindness of any who questions what he calls "the science" on climate change.

These folk represent "loud interest groups" -- i.e., "big companies" that "don't want to change and spend money" to prevent the melting of the ice caps and the withering of the planet. They are "a tiny minority of shoddy scientists" and "extreme ideologues." "The science is unequivocal!" Unequivocal; do you hear that?! "(T)hose who refuse to believe it are simply burying their heads in the sand. We don't have time for a meeting anywhere of the Flat Earth Society."

Wham. Down comes the curtain on an allegedly serious debate -- to the extent liberal/progressive hectoring about "climate change" can be interpreted as debate. The fake triumphalism of the liberal vision is nowhere more clearly to be viewed than on those occasions when liberals throw out of court any perceived obstacles to eradication of fossil fuels and their replacement with sunshine and gentle breezes.

Very much in the modern spirit, with "science" ratified as the final authority on everything, theology and philosophy included, science sits enthroned above us. The word, as wielded by politicians, says it all. Kerry has only scorn for "ideologues" who won't take his word. President Obama, visiting California, links the state's ongoing drought to "climate change." His Environmental Protection Agency proposes regulatory goals that likely would put coal plants out of business. There is but one way to do things -- Our Way, the liberal way.

Than which a more futile hope probably doesn't exist. The best way, in human terms, to keep a debate going is to say the debate's over. And, what's more, "we" won. Kind of the way the health care debate closed down -- right? "We" -- a united Democratic party -- did it "our way," and to the hot place with anyone else's way. Consider the splendid results! Young enrollees are, so far, too few in number to support older and sicker enrollees. Overall enrollment targets are far below earlier estimates. Costs vary around the nation. Many -- no one knows yet precisely how many -- find they can't keep their doctors.

The Olympians who designed Obamacare and handed it down to the riffraff are possibly feeling frustrated when the topic is climate change. They don't receive the deference they feel they deserve. Thus, conceivably, the stridency of Kerry's language. "Shut up!" he explains to the differently minded.

It's a challenge all right. The New York Times, no friend to "polluters," notes the lack of "scientific consensus" as to whether climate change is the cause of California's drought. Droughts do happen. Not a few of us recall the profound dryness of 1951-57 -- "The Time It Never Rained," to give it the title of Texas writer Elmer Kelton's great novel about the period. I mean, it (SET ITAL) didn't (END ITAL) rain. But eventually it did.

The winter of 2013-14 has been rough. Eighty-eight percent of the Great Lakes has turned to ice. In 1994, it was 94 percent. Take the matter back further. In February 1899 -- before gasoline engines -- the worst cold snap to afflict the country in modern times dropped temperatures to 7 degrees in New Orleans, dumped snow on Miami and froze the Mississippi River solid as far south as Cairo, Illinois. "Climate change?" If only John Kerry had been around, he might have ventured a viewpoint and proposed a federal program.

The intractability of life is a matter that disturbs liberals confident of their ability -- using the best "science" -- to engineer foolproof solutions to matters large and small. Thus their exasperation when things go amiss -- or, worse, people (the fools!) refuse to listen. The Obama administration -- the most monolithically liberal regime in half a century -- must be feeling pretty well put off by widespread ingratitude. So might we all, given comparable levels of perfect, dogmatic certainty.