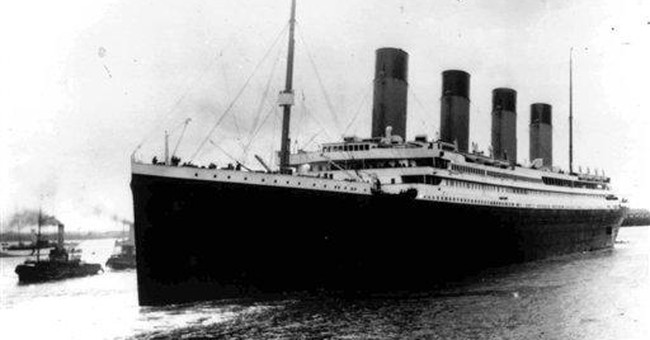 What remains to be said concerning Royal Mail Ship Titanic and her icy end, just 100 years ago? What hasn't been thought, said or filmed already? Why, then, the ongoing fascination with Titanic -- as alive at our own end of the catastrophe's century mark as at the start of it, which was April 14-15, 1912? You could say memories of Titanic haunt us -- as maybe they should.

My father, not quite 4 years old in 1912, remembered half a century later the hubbub in a small Texas town that followed receipt of the unthinkable news. The fascination persisted. Noel Coward, in 1931, used Titanic's plunge as a marker for Britain's own 20th century descent into icy cultural and political waters. Rod Serling's "Twilight Zone" dealt eerily, poetically with supposed episodes of cognition taking place around the world as the great ship sank.

James Cameron's gargantuan movie about Titanic's first and only voyage, now turned into 3D, isn't exactly a work of art, especially compared with the straight-on, factual 1958 British film "A Night to Remember," starring Kenneth More as Second Officer Charles H. Lightoller. Cameron and his vast audience work all the same a vein of human desire to confront ... well, what?

To confront, possibly, the human condition itself, at its starkest and most exposed. You've done the best that knowledge and wisdom permit. You've built the biggest ship ever. And it doesn't work out. The human line of vision goes barely up to the cold and darkness at the end of the greatest man's, the greatest woman's nose. Around the angles and corners of a strictly conditional world, no one can see. We guess; we extrapolate; we pray. Or maybe not. Possibly we merely lurch forward.

As More's character in "A Night to Remember" comments with eyes-open ruefulness, hours following the disaster, "I don't think I'll ever feel sure again -- about anything." Ah, no: not with the best product of human design and engineering having failed its first test.

The Greeks, who understood pretty much everything, would have understood the predicament. Their heroes and heroines were always matching wits and muscle with the gods -- and falling disastrously short in the attempt. As the Greeks told the story, the Titans themselves (hence "Titanic") lost out grandly in battle with the Olympians -- who, it seems worth relating, messed things up for themselves later on. As did the gods who still fascinate us in Richard Wagner's musical dramas, with their magic fires and rainbow bridges. It may be we feel in the twilight of the gods something of the same sadness and foreboding we experience as "Titanic" rears high in the air, before slicing diagonally into the North Atlantic.

"I don't think I'll ever feel sure again," the man said. That might be the ticket after all. Feel sure about what? The human capacity to take on pretty much any job and succeed at it?

"Titanic's" fate is sometimes taken as a case study in hubris and self-seeking: "such boasting as the Gentiles use," as Rudyard Kipling earlier elaborated the matter, "and lesser breeds without the law" (He meant Britain's rivals, the Germans). Even if Titanic was not designed to overthrow the laws of nature, still it was the work of a science-loving century with a tendency to seek ultimate power over the human condition. Kipling knew his fellow man: "For heathen heart that puts her trust/In reeking tube and iron shard/? For frantic boast and foolish word /Thy mercy on thy people, Lord!"

Two years after the Titanic disaster came the greatest catastrophe since the fall of Rome: the Great War, a conflict we believed (being human) we'd rendered unthinkable through commercial interaction and general enlightenment. A number of Titanic's victims could have consoled themselves in the hereafter that they were spared at least the horrors of the Western front.

It is no wonder, perhaps, we humans spend so much time with our disasters. They keep coming as it were out of the blue -- as on a lovely early autumn morning recently in Lower Manhattan.