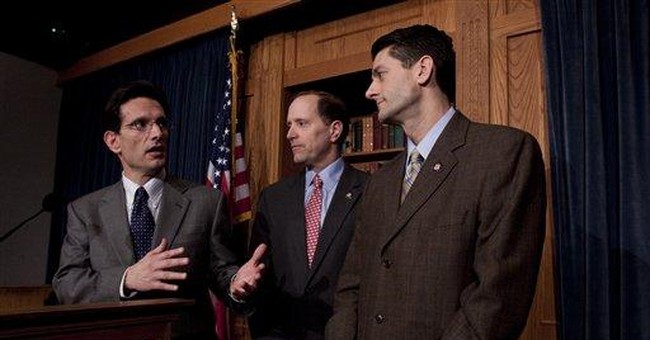 A new Associated Press-GfK poll that shows Americans evenly divided on the Obamacare repeal is getting big play as the House opens debate on precisely that course of action.

Won't it be amazing to hear Democrats argue -- in view of this spectacular turn in public opinion -- that House Republicans should now back off?

Nope. To Obamacare's proponents, opinion polls are irrelevant, except when the results tally with what they, the proponents, want to do. When results don't match expectations, too bad. Shut up!

Polls last year showing plurality support for stopping Obamacare in its tracks were understood, by the pro-Obamacare community, to reflect public confusion over the blessings that Congress was poised to bestow on us through partial nationalization of health care.

We just didn't understand, bless our hearts. The likes of Mrs. Palin and Glenn Beck had led us down the garden path. It was necessary that Congress pats us kindly on the national noggin and gives us what the polls showed, which most didn't want.

To be sure, repeal isn't going to happen this year -- no matter the size of the House majority in favor of it, or such arguments as Republicans bring concerning the unaffordability of the whole enterprise. The exercise of debating and voting on repeal will have wonderful effects notwithstanding.

Last time around, debate hardly took place. Mrs. Pelosi was firmly in charge on the House side. Passage was a done deal. Cost and constitutional aspects got no airing apart from what the spunkier breed of Republican could manage on non-congressional turf.

At last, thanks to the November election, prospects exist for meticulous exposure of the bill's defects and delusions, among them the interesting theory that it's cheaper to put 30 million new people on government insurance than not to do so. Democrats should expect that such claims as they make without factual or logical substantiation will meet with informed, intelligent pushback.

It wouldn't be surprising to find proponents of repeal, at the grassroots level, downshifting a bit. We all know life is dynamic. A time-honored property of the human race is to take, however reluctantly, what life brings irrevocably, learning somehow to live with it.

When it comes to Obamacare, the necessity laid upon Republicans -- one they have embraced -- is to say, and say again, look, this thing isn't going to work the way they told you it would. It's going to cost more than we were led, intentionally, to believe. It's going to narrow the medical choices we make, and there's a good chance it violates the U.S. Constitution.

Such are the points Republicans indeed will make. Democrats, by the same token, will come back and say, hold on, that's not right and here's why. When they do, they had better have their facts and figures straight if they mean to engage in robust and nourishing floor debate with the likes of congressmen Paul Ryan from Wisconsin and Mike Pence from Indiana, who know at least as much about Obamacare as its watchful guardians on the Democratic policy side claim to know.

Nor will Speaker John Boehner essay to gavel down Ryan, Pence and their allies. He will insist they be heard -- not to the exclusion of competing viewpoints, but rather to the end that we finally figure out the implications of this law that Mrs. Pelosi was so eager that we should embrace on the purity of her testimony and that of like-minded others.

No, repeal isn't going to happen this year. Something transcendently marvelous might happen instead -- the infusion of understanding into this complex and vexing debate. And not only that. In consequence of such understanding, we might sense some way of finally solving the health care problem -- which Republicans as well as Democrats acknowledge to be a problem -- through better, cheaper, broader use of freedom-preserving marketplace measures.

Last year, the Obamacare Democrats told America to shut up and do as we say. Now they have to explain why and how. It's going to be fun listening in.