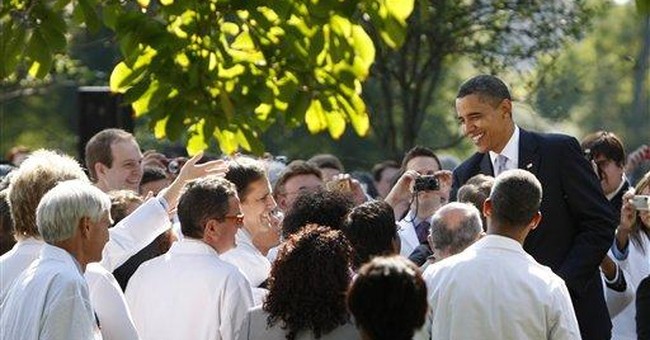 Plutarch tells us that, back in the fifth-century B.C., when the citizens of Athens were voting on whether to ostracize -- i.e., throw out -- Aristides the Just, one sourpuss explained his emphatic yes vote: "I am tired of hearing him called 'the Just.'"

I hesitate to introduce the comparison. It introduces the possibility -- assuming Jon Stewart and Robert Gibbs know there was a fifth-century Greece -- of saying, see, these people who stick out their tongues at Obama, they're just doing the usual envious bit. Big deal.

Let the peace prize alone. We've laughed enough for now. A larger point needs our attendance. It is the point, what happens when the air starts to seep from a balloon flying improbably high? How fast does it fall, and with what consequences to onlookers? How loudly do the onlookers cheer?

The more the Stewarts the Nobelistas build up their man Barack, the greater the impending chaos. Wonderworker, hope of mankind, The One (as Republicans called him for a time last year) -- where do you go from there? What's going to happen when people grow tired of hearing about the Great and Mighty Oz?

Anyone, friend or foe, who expects Obama to be all he has set himself up to be -- I deliberately omit the action word "do," because "be" better expresses the nature of Obamanism -- had better lay in a large stash of scotch and plenty of tumblers. The Nobel Peace Prize is just the latest instance of dangerous overstretch on the part of people who have invested their dreams in … a politician, of all things.

Today's sermon, brethren, isn't so much about Obama as it is about the limitless capacity of ordinary folk to imagine politicians as the solvent of all mortal incapacities. The Nobel committee has so imagined its American friend, investing him by implication with the duty of resolving antagonisms and hatreds from South Korea to Iran to Russia to Israel to Venezuela. That ol' dog, as we say in the South, won't hunt. Indeed, never has hunted.

Queen Victoria had it better, what with "arf o' creation" -- Kipling's phrase -- in her keeping. But it didn't last because human passions awoke, as they always do, and smashed Victorian hopes and sensibilities to smithereens in World War I. Not even Ronald Reagan -- to put the matter another way -- solved enough problems to stave off the Obama Temptation. Nothing human, it seems, works for long, if it works at all.

We go for politics because it's so hands-on. You vote; someone wins; laws get passed, regulations get enacted, then it's something else, and we start over.

A pretty good ride Obama has had thus far, but horses tire and stumble, especially when ridden as hard as this one has been. The first gentleman has gotten away -- mostly -- with creating an atmosphere, not of achievement, rather of coming achievement; a thing very different. He has had help, to be sure: the media, bilious memories of the Bush administration, a hard core of Democrats determined to use him for Democratic ends. And also good Americans, yearning for politics to produce something for a change; if not health care, why not energy? Anyway, something.

History, if scrutinized, takes a dim view of Deliverers. They foul up; they overreach. Religion alone teaches human limits, which is why humans tend to cast jaded glances at religion. Brotherhood, sisterhood, peace, endless happiness -- just a law or two away. Some tighter regulations and we've got it made. More government money, too, of course!

The old human afflictions -- sorrow, loneliness, a certain emptiness -- somehow careen along, heedless of self-appointed, or even generally acclaimed, Wonderworkers in the political domain. One hates to introduce history into a good political argument such as we're having now. One also hates not to.