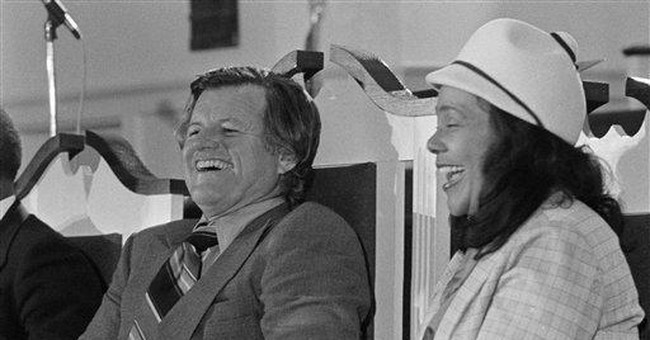 The end of Ted Kennedy's long sojourn among us, splendidly splashed by the media, opened the renewed discussion of whether it's time that big government, in the Kennedy mode, came back.

The late senator's eulogists -- in politics and the media, not to mention at the funeral -- tended to nod their heads enthusiastically. We needed the big ideas and projects of the senator's legacy for the sake of justice and the future. It was time to get wealth controlled, poverty vanquished and health care extended to all. The latter we had to do (so West Virginia's Sen. Robert Byrd assured us) as a memorial to the senator, who made universal health care the cause of causes.

Anyone in the mood for big, costly government is entitled under the First Amendment to talk it up, but they shouldn't expect automatic rallying around just on account of Ted Kennedy's election to another realm of existence. For that to happen, we'd have to conclude that big government, in the style laid out for our enthusiastic inspection of the Obama administration, has something to do with solving problems.

In the general understanding, big doesn't always mean better. It means big. Big, in turn, can mean various things: costly, expensive, gaudy, efficient or powerful. That last one -- powerful -- is the attribute on which we might focus. How much power do we mean to concede to government, so that it might be beneficial?

The political motif from the Reagan years -- running really through the '90s ("The era of big government is over," says W. J. Clinton) -- was that government was as much hindrance as help. Often enough, government was less help than bother and mess. The Obama supporters want to wrench that formulation around: Make us see government as an undisguised blessing. Is it, though? It depends on what you want government to do. Fight wars? Yes. Regulate interstate commerce? Yes, mostly. Administer justice and contribute to the relief of misery? Yes, yes. Make and sell automobiles. No! No!

Now we work into another mode. Shall government equalize incomes? No! Define meticulously how business may operate? No! Control access to health care? Never! The Declaration of Independence breathes distrust of government. It's in our DNA.

Americans don't hate government, unless I've missed something. They desire that government should keep its voice down, wipe its shoes and control its diet. This is for substantial reasons. First, big government costs more than we can afford -- $9 trillion is now the projected size of the Obama deficit, assuming voters stand by and let Congress enact the full, current Obama agenda. Second, he who pays the piper calls the tune. Big government begins by promising the good life and ends by defining that life. Is there anyone who hasn't heard Lord Acton on the subject? Power tends to corrupt, and … you know the rest.

The debate over Ted Kennedy's legacy, with Kennedy's fine stentorian voice silenced, may be brief. Kennedy made the exercise of government power sound to many like a function of civic duty. "Liberty" wasn't the senator's favorite word. You never heard him suggest there was danger in government oversight of our lives. You never heard John F. Kennedy, a moderate Democrat, suggest it either, and certainly not the old buccaneer Joseph P. Kennedy, father of the tribe. The "liberal lion," who was Ted Kennedy, roared proudly enough, but the generality of Americans don't like lying down with lions, lest one morning they fail to wake up.

Government in the United States is bigger today than a century ago, bigger than during Reagan's presidency, and likely to become larger. Its growth in America comes in fits and starts, as well as in proportion to the growth of the population and the economy. The love of government, though, for its own sake -- faith in government's purposes and methods -- no lion can sell that stuff. When Americans think of government, they imagine a different beast entirely: large and lumbering, slow-witted and occasionally vengeful. The elephant -- naturally.