The Rewards Of Hubris 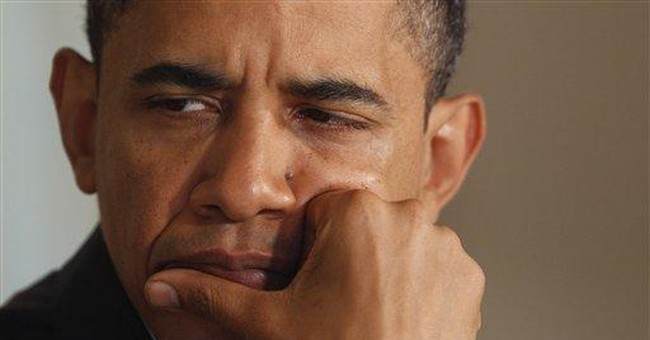 So here, as if on cue, it being a new day and all, came the Obama administration Monday to announce new arrangements for the way the country does business.

The new big idea: Tell all those banks how much they're going to be allowed to pay executives; let them know the gravy train leaves the track here and now; Washington has their number.

"The [bank pay] proposal," says the New York Times, "is part of a broad set of regulations on executive compensation expected to be announced by the administration as early as this week."

Father knows best, so sit still, kiddies. We bought, last election, into this arresting new way of living. It will be with us for a while. Until ….

Until, perhaps, the cut of the emperor's new clothes becomes clear. Can't say exactly how long that will take, but if I were high in the councils of the Obama administration I would be reading the Greeks for insights into the payback for hubris -- that being the administration's foremost product, evidenced as often as not in silken oratory.

The decree on executive compensation -- which is to apply even to banks that have paid back their TARP loans and extricated themselves from the worst consequences of government oversight -- is more of the same from the temple of Obama. More pride, more promising, more hubris: We'll renew the auto industry and build fuel-efficient cars we defy Americans not to buy; we'll knock together the Arabs' and the Israelis' heads; we'll substitute water and wind for oil and coal in our energy calculus; we'll "prepare every child, everywhere in America, to out-compete any worker, anywhere in the world."

And of course -- naturally, you bet -- we'll make health care available to every American: the project our do-everything administration has put on the fast track for this summer.

Various voters may wave their hats in the air and cry hooray. A different kind of sentiment overtakes others: the impulse to look for a storm cellar, because, brother, days of reckoning, when they arrive, aren't pretty.

It seems pretty clear that just such a day will dawn soon for the Obama crew. Exact predictions are vain, but the Democrats, against their own reading of the case, are staring disaster in the face. They can't deliver on all this: the harder they try, in instances such as health care, the graver grow the likely consequences for them, starting with loss of moral and intellectual credibility.

Health care indeed threatens to become our frisky administration's banana peel -- its first and central crisis; the one, possibly, that destroys public faith in the administration's ability to do anything constructive. Not that the Democrats can't pass a bill of some sort. It's that they can't pass one we can pay for, now or at any time in the future. The kind of bill that would provide uniformly excellent medical care to all Americans -- at a time when Medicare, the last gargantuan entitlement program, nears impoverishment -- is an ideal that doesn't correspond to reality. Unless, to be sure, with true reforming zeal, we redefine. In that case, it's enough to imagine that we can pay by taxing "the rich" or the policies that business now offers employees; or cutting medical costs (which already outstrip all other costs) by some magical means.

Some of it, in the technical sense, Congress can do -- like raise taxes. What Congress can't do is make Americans like the outcome when taxes rise and health care gets harder and costlier to procure.

Unassailable belief in the unassailable competence of government is the Obama administration's signature tune. You hear it whenever the teleprompter powers up. Yes, we can! "Can" what? "Can" everything.

It is a remarkable moment we inhabit, but it can't last. A coterie of -- it would seem -- cool Olympian deities has taken upon itself the remaking of America: failing to appreciate the built-in limits of competence and exertion.

The gods always were mythological. They just didn't know it.