Could the Republicans Win This One? 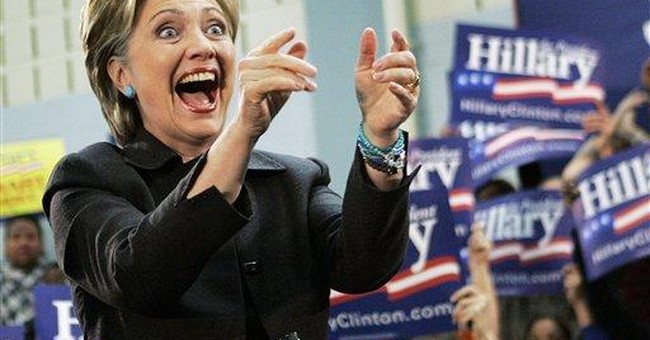 The impression takes root and grows. Say! The Democrats could lose this one. Could lose big, in fact.

On which premise no one should stake even his subprime mortgage. But boy, oh, boy, this Clinton-Obama thing, expanded now to compass the Kennedys and their mystique, must strike Republicans as the work of Providence.

Our long, long, long presidential campaign is producing clarifications. Extended exposure to the candidates and their campaigns shows us things not generally in view before, say, Bill Clinton jumped in swinging at Barack Obama and slugged his wife -- purely an accident! -- on the chin.

The idea of a second Clinton presidency introduces us to consideration of the blurred and messy lines likely to distinguish it from the first Clinton presidency. In other words, can she control him? And what if she can't?

To many old-line Democrats, a Hillary Clinton presidency sounds less chancy than one with an untested Illinois senator in charge. Whereas no one really -- I mean really -- knows how Obama might perform in office, Hillary could be called the devil one sticks to on account of being known. Will that be enough to sway voters who know more than they really want to about the messiness of the last Clinton White House?

And now the Kennedys' endorsement of Obama -- a very, very stiff arm to the country's other big-time Democratic family. The longer the Democrats bicker and divide and stab each other from behind, the worse seem the prospects of taking back a White House all Democrats used to agree lay open to them.

Nov. 4 -- Election Day -- lies nine months in the future. No American of either party or any philosophical disposition should take anything whatever for granted. And yet the Democratic Party, in mid-winter, looks weaker than anyone would have thought possible back when it grabbed control of Congress and started throwing its weight around.

It no longer looks implausible that John McCain or even Mitt Romney could wind up taking the oath of office slightly less than a year hence.

What both candidates have going for them now -- I set aside policy and personality -- is that both seem to know what they're doing: which is more than one can say for certain Democratic competitors.

A fair question is, do the Clintons' antics impeach (forgive the word) Obama's prospect for carrying the day alone? Suppose he shook off Hillary? Might not that be enough?

It might; or, again, it might not. Consider first those holes in the Obama resume -- the experiential vacancies to which the Clintons have been pointing. Out there on his own, hoping to woo independents and some Republicans, could an untried, untested, wet-behind-the-ears freshman senator sell himself as the ablest man in the world (which one really ought to be, in order to lead effectively the strongest nation in the world)? Even Ted Kennedy's brother Jack had behind him 14 years of congressional experience when he defeated Vice President Richard Nixon. And is the country truly ready to put in place of a more-or-less conservative president -- even one named Bush -- a chief executive with advanced left-wing credentials? (Check out the Obama Web site.) He's going to sell big government to the average taxpayer?

Consider as well the potential for the Clintons gallantly to embrace Hillary's defeat before poisoning the victor's well. Blood feuds, if this turns into such, don't heal quickly. Or sometimes at all.

The mark of these very strange people, the Clintons, is their sense of entitlement: Running the country is their right, dammit, and why can't the rest of us understand that? I really can't imagine the family Clinton giving a break to anyone who doesn't see things in just that light.

We learn once more, wherever we come from on the philosophical spectrum: Take nothing in life for granted. It's a necessity that keeps even presidential candidates off balance -- a pretty good way of keeping them, by the way.