Bette Grande
|
Posted: Mar 02, 2020 12:01 AM
Share   Tweet
The opinions expressed by columnists are their own and do not necessarily represent the views of Townhall.com. 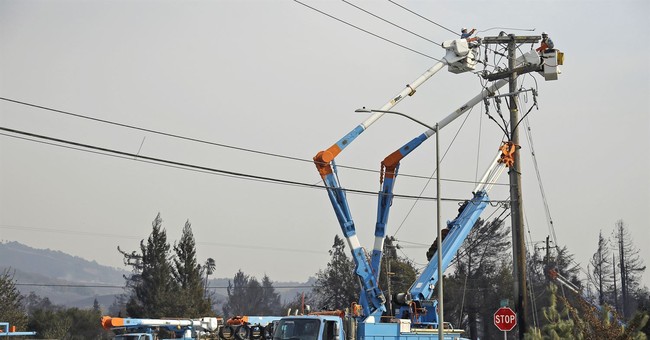 For several generations, almost every American has known nothing other than light at the flick of a switch. We may not know how it all works, just that it works. Today, we take reliable electricity for granted.

Electrification is called the greatest engineering achievement of the 20th century. Lights, washing machines, and refrigerators have changed our lives. Air conditioning not only makes us more comfortable in the summer, it saves lives. Our world, as we know it, would not be possible without safe, steady, and reliable electricity.

Which brings us to today. What type of society voluntarily forces the retirement of viable—and reliable—coal-fired power plants at great cost and risk to its people, without a realistic plan to replace baseload electricity?

It is not a rhetorical question. It is a very real question we should be asking politicians, regulators, and utility company leaders. Pandering to vocal activists will not keep the lights on. Batteries are not baseload.

The U.S. Energy Information Administration (EIA) defines baseload as the minimum amount of electric power delivered or required over a given period of time at a steady rate. Baseload generation comes primarily from coal, natural gas, and nuclear. According to the EIA, these three sources accounted for 81 percent of electricity generated in the United States in 2018.

Coal is the top target of environmental activists and coal-fired facilities are facing a steady headwind of mandates, regulations, and subsidized competition. Such is why coal-fired power plants are being shut down prematurely across the county. Nuclear energy faces similar challenges and its share of electricity generation seems destined to drop as older facilities reach the end of planned lifespans. Natural gas has gained market share from coal as abundant and inexpensive gas has made it cost competitive.

Before those in the natural gas industry celebrate their success, they should realize that environmental activists put up with natural gas as a short-term tool to end the use of coal—the lesser of two evils. The winds of change are already blowing with natural gas facilities as the next target.

Our electrical grid and the facilities that generate reliable baseload electricity are critical infrastructure. On November 1, 2019, the U.S. Department of Homeland Security (DHS) kicked off Critical Infrastructure and Resilience Month with an article titled “America's Critical Infrastructure: Keeping the Lights On Amid Threats.” This piece did not mention the premature closing of coal-fired plants as one of the threats, but it is interesting that “keeping the lights on” is reliant on critical infrastructure.

Energy is one of the 16 critical infrastructure sectors identified by DHS; in fact, it could be the most important sector. From the DHS Energy Sector page, “The U.S. energy infrastructure fuels the economy of the 21st century. Without a stable energy supply, health and welfare are threatened, and the U.S. economy cannot function.”

As a strong proponent of federalism, I believe each state should exercise primary control within its borders. However, policies and regulations in one or several states that jeopardize critical infrastructure, jeopardize national security.

The Department of Energy (DOE) is the lead agency for Energy Sector Critical Infrastructure. In 2017, then-Secretary of Energy Rick Perry requested a study of the electricity markets and reliability. The study, released in August 2017, found “Ultimately, the continued closure of traditional base-load power plants calls for a comprehensive strategy for long-term reliability and resilience.”

Sadly, in 2020, there is no comprehensive strategy and regulators continue to push for the closure of coal-fired plants across the county.

So, how do we keep the lights on? First, we must understand that federal subsidies and state renewable mandates favor wind and solar over traditional, dispatchable power. The 2017 DOE study found that renewable providers will sell electricity at negative prices simply to maintain their Renewable Energy Production Tax Credits. Coal, and other traditional baseload providers, cannot compete with renewables subsidized by the taxpayer.

The consequence, intended or not, is the loss of traditional baseload capacity as well as stability of the grid. Regulators are aware of the risks and costs. A white paper from the National Association of Regulatory Utility Commissioners in January 2020, acknowledges the critical role that coal plays in grid stability. It’s a good start.

Second, policy makers and regulators at both the state and federal levels must recognize that the move to renewables cannot simply be “green lighted” without considering the true and full cost this will have on the grid, individuals, and the economy. The cost of maintaining coal-fired capacity is a direct cost of renewable resources and those costs should be factored in when regulators analyze renewable projects.

The private sector cannot be expected to invest significant capital to maintain and improve existing coal plants without regulatory certainty. A Critical Infrastructure designation over the remaining traditional baseload facilities not only acknowledges reality but it provides security to support future private investment.