Betsy McCaughey
|
Posted: Dec 20, 2017 12:01 AM
Share   Tweet
The opinions expressed by columnists are their own and do not necessarily represent the views of Townhall.com. 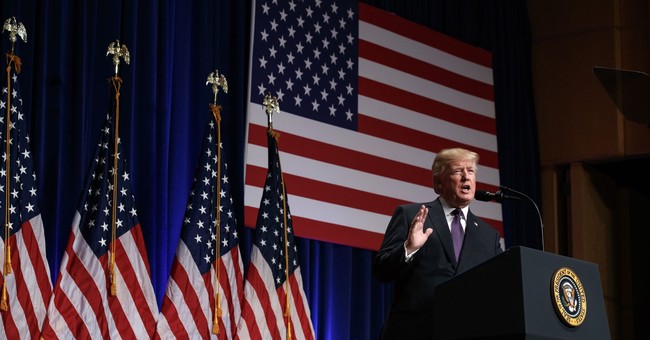 Flanked by a towering 185,000 pages representing the federal regulatory code now and a short pile of 20,000 pages -- the code's length a half-century ago -- President Trump pledged last week to return us to the days of fewer regulations. Pointing to the colossal pile, which would take some three years to read, the president reiterated what Americans know firsthand, that "every unnecessary page" means "projects never get off the ground."

Trump claims he's already eliminated 22 rules for every new one imposed this past year. His critics dispute how many he's actually scrapped, but no one denies he's brought the steady stream of new rules nearly to a halt. This regulatory pause is buoying business optimism and the stock market.

What's coming next? Rolling back rules on mining, manufacturing, oil exploration, banking, you name it. Even better, both the Trump administration and some Democrats in Congress want to relocate federal agencies from inside the D.C. beltway to cities in the nation's heartland. Getting Washington out of Washington.

Imagine regulators having to rub elbows with the people being regulated.

There's a lot of wisdom outside the Washington bubble. Why should federal management be concentrated so far from the industries and people affected?

These struggling cities have universities, airports -- amenities of urban living without the astronomical cost of Washington, D.C. Bringing federal agencies to these cities could revitalize failing economies as office supply stores, restaurants and home builders spring up to meet the demands of federal workers and their families.

Taking the lead is Interior Secretary Ryan Zinke, currently developing plans to move three large public land-use agencies to the West. Western governors like Colorado's John Hickenlooper are wooing Zinke to get operations moved there. New York's Andrew Cuomo should take a page from that playbook, and promote our upstate cities as suitable homes for federal agencies.

Of course, not all federal workers residing in D.C. will move willingly, and opponents of the idea claim it's a covert way to shrink the federal workforce. All the better, says Philip Howard, chairman of Common Good. "Agencies should be moved out of D.C. and repopulated with people looking to help Americans, not stifle them."

And not deliberately thwart the policies of the president. One of Trump's biggest challenges is taming the "deep state" -- now two million federal bureaucrats strong -- burrowed deep in agencies across the capitol region. Dispersing it is one way.

Thank this permanent bureaucracy for the 185,000 pages of stifling regulations. Through Republican and Democratic administrations, regulations on manufacturing have come gushing out of Washington, D.C. Regardless of the merits of each specific regulation, impose enough of them, says Stephen Gold, CEO of an industry group, and manufacturing "starts to sputter."