Conservatism 101: Who is Really a Conservative? 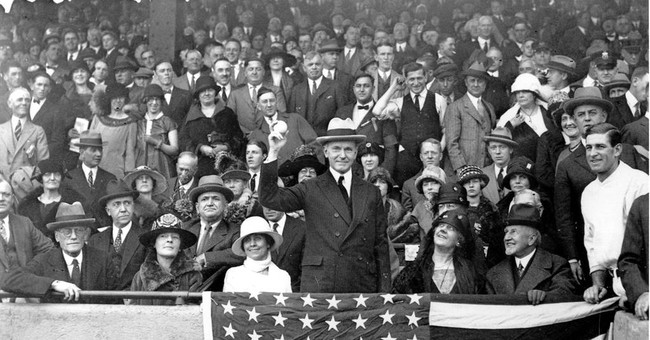 Most Americans, including most Republicans, do not understand what “conservative” philosophy, principles, and policies are.

Merriam-Webster defines conservative as “believing in the philosophy of conservatism,” which it defines as “belief in the value of established and traditional practices in politics and society; dislike of change or new ideas in a particular area.”

However, this definition is wrong. The root of conservatism lies in the concept of “ordered liberty” and the fundamental truth that human rights are God-given, not man-made and that individual liberty and freedom are birthrights.

Calvin Coolidge, America’s 30th president—perhaps the most conservative president of the last century—emphasized the underpinning conservative principle of the rule of law rests solely on “the divine origin of mankind.”

In his speech, The Price of Freedom, Coolidge emphasized that in America’s founding documents “there resulted the recognition that freedom was a birthright. It was the natural and inalienable condition of beings who were created ‘a little lower than the angels.’ With it went the principle of equality, not an equality of possessions, not an equality of degree, but an equality in the attributes of humanity, an equality of kind. Each is possessed of the divine power to know the truth.”

Likewise, conservative commentator Dennis Prager defines conservatism by what he calls “The American Trinity,” which preserves three fundamental truths. First, “In God We Trust” is the foundation for the rule of law. Manmade laws are designed to protect God-given human rights. From that, “E Pluribus Unum,” a unified and diverse people are encouraged to live peaceably, with “liberty” in their pursuit of happiness.

Within the American Trinity and republican form of government, the electorate determines the moral and ethical decisions and laws through representatives acting on their behalf. In theory, the electorate governs through limited local, state, and federal governments that restrain and punish the malfeasant and enable ingenuity, personal responsibility, entrepreneurship, creativity, and a range of its citizens’ pursuits.

The electorate may redefine and change moral and legal constraints but conservatism does not.

Dividing conservatism between social/fiscal policies is a false dichotomy. The root of conservatism is not laissez-faire economic policies that create personal financial profit and power, but principles that value life-giving activities that improve societal welfare.

Coolidge evidenced fiscal responsibility by significantly reducing tax rates and the national debt by nearly one third. Debt, he argued, stifled freedom, limited entrepreneurship and economic growth. He advocated for personal responsibility and accountability through the rule of law, attempting to make illegal lynching and racial segregation, and hate crimes. He also sought to create national commissions to help bridge racial divides—yet progressives fought him at every step.

Contrary to Merriam-Webster’s definition of conservatism, that it “dislike(s) change or new ideas in a particular area,” conservatives have consistently opposed the status quo. Instead, seeking to change the law in order to protect human rights, especially when the law seeks to eliminate equality of natural rights and regulate equality of outcomes.

In this way progressivism replace ordered liberty, the American Trinity, and the principles “No God, No Liberty” and “the divine origin of mankind” with “No God/Morality,” and “No Unity,” and “No Liberty.”

“In God We Trust” is replaced by a Godless society that teaches children the state, not God, creates rights and defines morality. “E Pluribus Unum” (of the many, one) is replaced with divisive policies (of the many, many) and “Liberty,” with regulated inequality. In response to this approach Prager reasons, “I can’t think of anything more demeaning than to tell a group we will change the rules and lower the standards just for you.”

In the name of “progress” individual exceptionalism, ingenuity, creativity, successes and failures and the lessons learned from them are restricted and penalized. Yet, as history has shown “equating” economic or social outcomes results in repeatedly failed consequences that devalue life and eliminate human rights.

Conservatives support policies designed to safeguard the principles of the American Trinity and ordered liberty and thwart attempts to weaken and ultimately destroy them.