Bobby Jindal Leads the Saints in the Greatest Game Ever Played 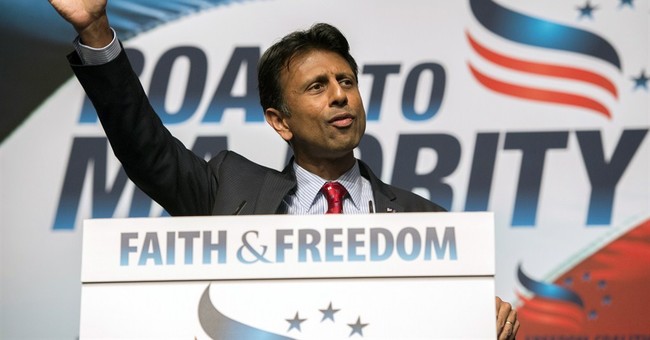 One of the most impressive leaders I have ever met is Louisiana Governor Bobby Jindal. A strong family man, devoted husband, father, and son, and perhaps one of the most astute and articulate politicians I know, he’s also quite hip.

With sincerity oozing from his pores, one is immediately drawn to his passion for life and his commitment to bringing about good for his neighbors, family, and the electorate who overwhelmingly voted for him four times. Not only has he turned Louisiana’s economy around, streamlined and improved its healthcare structure, but he is a leading voice in offering solutions for energy independence and public education.

Yet his effectiveness as leader and politician is rooted in his fire for God, which fans the flames of faith, Punjab—and—Cajun style.

Prior to New Year’s Eve, Jindal sent a letter to 100,000 pastors to “discuss the importance of raising up the next generation of leaders in America,” referring to the men of Issachar in the Old Testament of the Bible. He asserts that America needs “such men and women of wisdom today who will accept the challenge to restore America’s Judeo-Christian heritage.”

Jindal’s letter was a precursor to his busy schedule, which began in Iowa in early January at thirty below. One Iowan minister told me how struck he was by Jindal’s resemblance to JFK’s likability, Ivy-league intellect, and presence. Jindal’s demeanor and policy-driven business-mind however, is immediately recognizable though seasoned by his Louisianan drawl and genuine Southern charm.

Other politicians and potential 2016 presidential candidates will meet with pastors in Iowa on January 24th at Iowa’s Freedom Summit. Instead of joining them, Jindal will be in Baton Rouge hosting “The Response- Louisiana: A Call to Prayer for a Nation in Crisis.” Following the first Response in Houston in 2011, the free event hosted by the American Renewal Project is organized solely to focus on God through prayer.

In fact, the day before Jindal and I met at another event for pastors, this time in Houston, he had initiated a two-hour prayer meeting with thirty men to pray for spiritual revival in America in his home.

One key point Jindal repeatedly emphasizes is that electing the right people or passing the right legislation is not enough to steer America in the right direction. What concerns him the most he says, “is the secularization of America, the coarsening of our culture,” and the loss of religious liberties, which appear to be largely directed towards Christians.

“Religious liberty created the United States of America, not the other way around,” he emphasizes. “We seem to have leaders in our universities, in the media, and in the government that don’t understand this. Nor do they understand that our founding fathers created a limited government to secure our God-given rights, not to create those rights.”

In speech after speech, Jindal crisscrosses America encouraging everyone he meets. A die-hard New Orleans Saints fan he cannot help but use football analogies to explain why he and others must not lose hope.

“It’s like you’re watching a football game and you already know which team is going to win,” he lights up describing. “Our God wins. He beats death. There’s no question that our God wins. That doesn’t mean we know what’s going to happen in the first, second, third or fourth quarters, or that we know what’s going to happen before the end of the game.” But because the outcome is known, he notes, “Christians need to be more joyous.” We can boldly suit up, show up, practice, be part of a team and focus on the same goal.

“We need to understand that it’s not inevitable that our best days as a country are ahead of us. But it can happen,” he adds.

“Our 40th president used to remind us that every generation has to choose for itself to renew those principles of freedom. The great thing about America’s history is that it seems that when the hour was darkest we would have these amazing great awakenings, a specific time of turning back to God.”

Jindal highlighted his time in Cedar Rapids and Des Moines this week when pastors reflected on the truth espoused by early 19th Century theologian Adolph Saphir, who said, "It is in the night of adversity that the Lord sends forth bright stars of consoling hope."

He insists The Response is necessary for America’s future especially because he is a father of three young children. With sparks in his eyes he says resolutely, “I want to make sure we leave them the inheritance we received, the blessings and the ability to be raised in the greatest country in the history of the world. But we need to turn to God in prayer for that to happen.”

One can hope. As the classic song inspires:

“O Lord, I want to be in that number
When the Saints go marching in.”