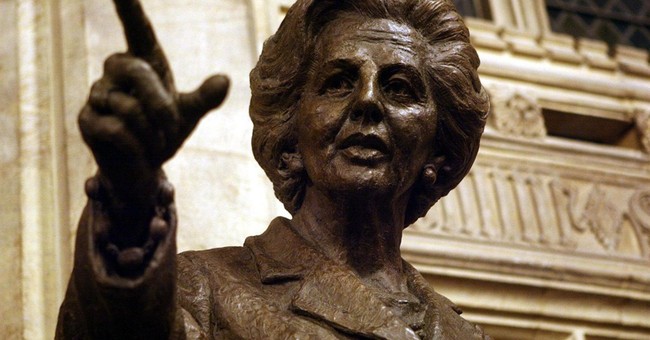 Gov. Mike Huckabee recently retraced the steps of Pope John Paul II, Margaret Thatcher, and Ronald Reagan with a group of ministers and faith leaders. After touring Parliament, Westminster Abbey, and the Churchill War Rooms, he remarked that both Margaret Thatcher and Winston Churchill were heavily criticized and often dismissed yet they remained steadfast to name and fight evil.

“During two periods of massive global change,” Huckabee argued, “if these world leaders had been ambiguous about evil the world would be quite different.”

For Churchill, evil was Nazism and fascism. In 1936 he said of Stanley Baldwin’s government, “They go on, in strange paradox, decided only to be undecided, resolved to be irresolute, adamant for drift, solid for fluidity, all-powerful to be impotent.”

For Thatcher, evil was socialism and communism. She said, “I am in politics because of the conflict between good and evil, and I believe that in the end good will triumph.

“And what a prize we have to fight for: no less than the chance to banish from our land the dark divisive clouds of Marxist socialism.” Ronald Reagan alone stood with her, as the only world leader to call the Soviet Union what it was: “the Evil Empire.”

Why did they fight, despite their opponents’ incessant impotence, ignorance, and impudence?

According to Huckabee, they fully understood what evil is: “Evil creates oppression and takes from the human soul that which is most like God—because freedom, creativity, and joy all come from God. And when a government devalues human beings, it sins against God.”

And they knew the ultimate cost of doing nothing when faced with evil. Churchill warned in 1936, “Virtuous motives, trammeled by inertia and timidity, are no match for armed and resolute wickedness. A sincere love of peace is no excuse for muddling hundreds of millions of humble folk into total war.”

Again, in 1938 after Neville Chamberlain’s failed meeting with Hitler, Churchill said, “You were given the choice between war and dishonor. You chose dishonor and you will have war.”

And when war came, it was Churchill, not Baldwin or Chamberlain, who had to fight.

Sadly, British and American leaders have chosen dishonor and war is already upon them.

Which is why, while reading the Latin inscriptions detailing Stephen’s martyrdom and viewing the gothic carvings of six other martyrs along the walls of the Chapel of St. Mary Undercroft, it was stunning to hear a British self-identifying Christian claim:

Tragedy extends beyond this falsehood. For it is impossible to know what is false if truth is not known, not acknowledged, and not named. Likewise, evil cannot be fought if it is not rightly acknowledged and named.

The truth, which most Brits know, is what George Carey, the former Archbishop of Canterbury, just recently said: “Christianity in Britain is one generation away from extinction,” emphasizing the “urgent and worrying gap” between ministers and youth. Indeed, recent census figures indicate that in 2001 there more Christians under age 60 than in 2011. To date, evangelicals only account for 3 percent of the population.

While Christianity heads towards extinction, the non-religious and Muslim (by 40 percent) sectors are multiplying.

(This is partly due to the fact that Muslim births triple the number of non-Muslim births. It also results from British policies, which created an influx of immigrants to the point that London is now the “birth-rate capitol of Europe.” As of 2012, more than 200,000 babies were born each year in the UK (40 percent in London) by Pakistani, Polish, and Indian immigrants.)

The truth is that more Brits go to mosques than the Church of England.

The truth is that people have stopped going to church because there is nothing to hear. (More than 1,500 Anglican churches have been knocked down, sold, or rented [made “available for disposal”] by the Church of England’s Closed Churches Team.) And it’s not hard to understand why—when church leaders claim, “a church always looks like a church, no matter what it’s used for.”

Churches are now “used” as pubs, rock climbing centers, supermarkets, high-end flats, libraries, temples, mosques, and even a circus school. In none can be found a King James Bible or a Book of Common Prayer.

The truth is that while non-Anglican churches are growing by small numbers, they are no match for the nearly 2,300 mosques and affiliated organizations in the UK, of which the largest—each—hold 8,000. Some claim Baitul Futuh will be “the largest mosque in Western Europe," holding 10,500. Regents Park Islamic Cultural Center already holds nearly 10,800 every Friday.

The truth is increased crime is directly correlated to Muslim immigrants flooding British prisons, and the dire consequences associated with the decline of Christianity, British government appeasement policies, and its modern welfare state.

The truth is British leaders have not called Islam what it is: anti-democratic, totalitarian, and evil. Instead of immigrants being required to learn or assimilate to British culture Muslims are telling non-Muslims how to live in their own country.

Muslims distribute an instruction manual, among other efforts, to instruct British leaders, including the Scotland Yard, how to “accommodate or recognize normal Muslim practice.”

One wonders if this is why police ignore pedophilia and violence against women in Muslim communities. Or explains why British law is not enforced to eradicate Shari’a Courts and eliminate no-go zones.

Leaders are MIA at every societal level, both in and out of government. No one is claiming what Britain stands for, who its people are or what they value and oppose. Leaders are needed to embody Thatcher’s perseverance, who often remarked, “Defeat? I do not recognize the word.”

She quipped, “Do you think you would ever have heard of Christianity if the Apostles had gone out and said, ‘I believe in consensus?’”

Thatcher was not defeated, even in death. In 2013 she was then the only politician in British history to rest in the Chapel of St. Mary Undercroft. A fitting memorial to a leader who chose to fight evil, to be surrounded by images of martyrs who had also chosen to fight and also received honor.