Guess Who Embarrasses a Majority of American Voters

Bernard Goldberg
|
Posted: Aug 08, 2017 12:01 AM
Share   Tweet
The opinions expressed by columnists are their own and do not necessarily represent the views of Townhall.com. 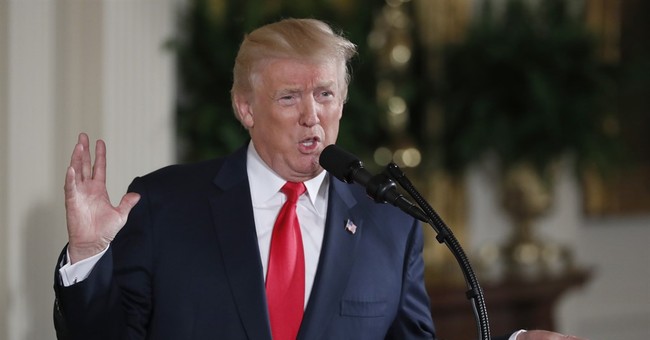 Several new polls are out and none of them look good for the president.

Gallup has President Trump with only a 36 percent job approval rating -- and a 60 percent disapproval number.

The news from Quinnipiac University is even worse. In that poll, only 33 percent of American voters have a favorable opinion of him -- while 61 percent disapprove of the job he's doing.

According to Quinnipiac, "American voters say 54-26 percent that they are embarrassed rather than proud to have Trump as president. Voters say 57-40 percent he is abusing the powers of his office and say 60-36 percent that he believes he is above the law."

How about honest? Sixty-two percent say he isn't.

Does he care about the average American? Fifty-nine percent say he doesn't.

"It's hard to pick what is the most alarming number in the troubling trail of new lows for President Donald Trump," according to Tim Malloy, the assistant director of the Quinnipiac University Poll. "Profound embarrassment over his performance in office and deepening concern over his level-headedness have to raise the biggest red flags."

To Trump's most loyal supporters, who have next to no faith in polls, it's fake news. Except, the polls can't be all wrong, can they? In the five newest major polls, President Trump doesn't hit 40 percent approval. The Real Clear Politics average has him at 39.4 percent approval and 55 percent disapproval.

President Trump does have a 76 percent favorable rating among Republicans in the Quinnipiac poll, but while that looks good by comparison, it's not great. A president needs more than 3 out of 4 members of his own party supporting him. And only 34 percent of independents like the job Trump is doing.

But there is one group of Americans, as The New York Times explains it, that despite the daily chaos emanating from the Trump White House still strongly supports him and "has never really wavered: the leaders of the conservative movement."

Tony Perkins, the head of the Family Research Council who serves as a pastor at a church in Louisiana told the Times that, "There's not a Sunday that goes by that I don't have people in the congregation that will grab me and say, 'How's the president doing? Did you see him this week? I'm praying for him every day and I'm just so angry at the media and how they're attacking him.'"

I've always been fascinated how people of faith who supposedly admire civility and decency and detest abortion so love this man who brags about grabbing women by the you-know-what and, until he decided to run for president as a Republican, was a Democrat who gave lots of money to Nancy Pelosi, a leader of a party that stands, above all else, for abortion rights. But I guess deciding to ban transgender people from the military (as the president did, in a tweet no less) goes a long way to put smiles on evangelical faces. And then there's the Hillary Factor -- as in anybody was better than a liberal like her as far as a lot of evangelicals were concerned.

But it's not just evangelicals who haven't wavered; neither have some media conservatives, the ones mainly on radio and TV. But while it's one thing to support Trump over Hillary Clinton, it's quite another for radio and TV conservatives to willfully play the role of sycophants for this president.

Bret Stephens, The New York Times columnist, asked a good question: "Thought exercise for Trump's media defenders: If the president were to sexually assault a woman in the Oval Office tomorrow, would you still justify your vote on the view that Neil Gorsuch's elevation to the Supreme Court made it all worthwhile?"

I wonder how Tony Perkins and Sean Hannity would answer that one.

Yes, poll numbers go up and poll numbers go down. To the extent that they're accurate, they only tell you what's going on in the moment. But if something doesn't change soon, Republicans could lose the House next year. And if that happens, it won't be long before there's a vote by the Democratic majority to impeach the president. It won't get far; there won't be enough votes to convict him in the Senate. Still, Trump and his loyal followers don't need any of this.

There is one hope, a sliver of sunshine peeking through the clouds -- and his name is John Kelly, the president's new chief of staff.

That was a good move by the president. Now let's see if a four-star, no-nonsense Marine general can rein in this impulsive president. The stakes are high. Donald Trump's presidency hangs in the balance.