Ben Shapiro
|
Posted: Jul 10, 2019 12:01 AM
Share   Tweet
The opinions expressed by columnists are their own and do not necessarily represent the views of Townhall.com. 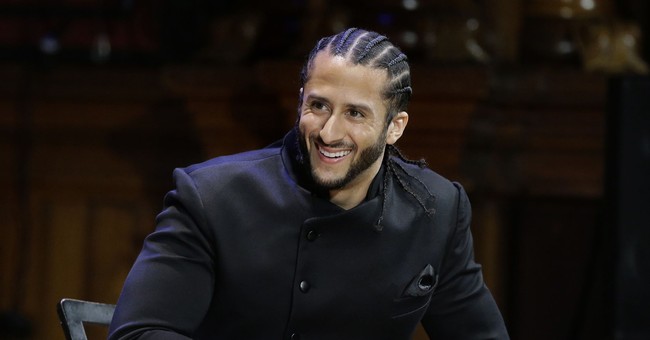 Or perhaps we haven't learned any of those things. Perhaps all of this is nonsense, and we've merely learned that Americans are angry, that they're channeling that anger in increasingly bizarre directions, and that opportunists of every stripe are willing to take advantage of that anger for their own benefit.

Take, for example, the Betsy Ross flag. Not only was Ross an abolitionist Quaker; the flag has flown for centuries as a symbol of a country that fought the single bloodiest war in its history to abolish slavery. The flag flew at Barack Obama's inauguration. Not until the last five minutes was someone cloddish enough to suggest that the flag represents slavery and racism -- until Nike announced that it had canceled the manufacture of a Ross-inspired shoe at the behest of failed NFL quarterback and national anthem kneeler Colin Kaepernick.

Kaepernick, whose knowledge of politics is approximately as accurate as his downfield passing game, apparently taught Nike some tough lessons about American history (not about sweatshop labor, however). Thus, the sneakers were withdrawn, and a weeklong controversy ensued about the supposed evils of the Ross flag.

The good news for Nike: Its stock rose. That's because Nike knows that controversy generates earned media, and it knows that black Americans are far more likely to be attracted to its social justice warrior posturing and more likely to buy more Nike shoes (one study from 1986 to 2002 found that blacks and Hispanics spend up to 30 percent more on apparel and jewelry than whites with comparable incomes).

Corporations understand that nontroversies can sell, just so long as you can sell them as controversies. When Disney announced this month that the actress playing Ariel in its live-action remake of "The Little Mermaid" is Halle Bailey, who is black, a few internet trolls tweeted #NotMyAriel. Soon, the world was aflame with news that the Disney-loving KKK was out of the woodwork; Freeform, a Disney-owned cable channel, immediately unleashed a long open letter "clapping back" at the critics, not a single one of whom was prominent enough to be named.

And in the end, that's how this works: Everyone gets credit for "clapping back," even if there was no actual clapping in the first place.

It works politically, too. The big winner from the first Democratic primary debate was Sen. Kamala Harris, D-Calif., who lumped herself in with Rosa Parks this week after bashing former Vice President Joe Biden for having failed to support federally mandated forced busing in the 1970s. When asked whether she would support such a program, Harris demurred -- as, indeed, she had to, since forced busing is wildly unpopular and was wildly unsuccessful, carrying unintended consequences that actually exacerbated de facto segregation rather than alleviating it. She still got points for knocking Biden, though she holds his exact position on the issue.

There's a lot of profit to be made, both politically and financially, in generating and maintaining stupid controversy. Perhaps that speaks to our national need for catharsis. But here's the thing about unjustifiable anger: It's never satiated. So watch for our controversies to get stupider and stupider -- and more and more profitable for those who egg them on.

Ben Shapiro, 35, is a graduate of UCLA and Harvard Law School, host of "The Ben Shapiro Show" and editor-in-chief of DailyWire.com. He is the author of the No. 1 New York Times bestseller "The Right Side Of History." He lives with his wife and two children in Los Angeles.

Ex-Gorsuch Law Clerk Takes a Blowtorch to the Imaginary Law Violations the FBI Cited in Trump Raid
Townhall
Sam Harris clarifies that clip where he says he wouldn't have cared if Hunter Biden had children's bodies in his basement
Twitchy
Harriet Hageman Accused of Lying About Liz Cheney Concession, Then She Released the Voicemail
Redstate
Feds Swear Trump Investigation Was in 'EARLY STAGES' When FBI Stormed Mar-a-Lago. Oh, Really?
PJ Media