Ben Shapiro
|
Posted: May 16, 2018 12:01 AM
Share   Tweet
The opinions expressed by columnists are their own and do not necessarily represent the views of Townhall.com. 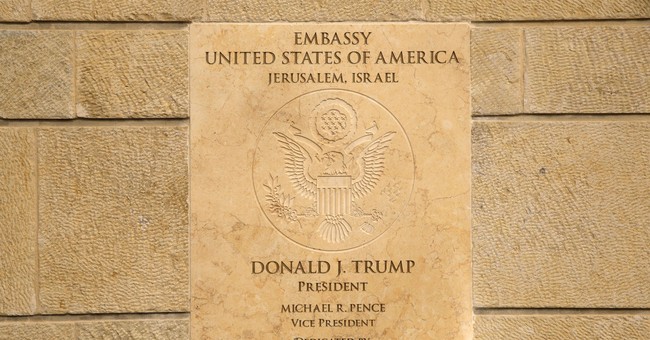 This week, the Trump administration inaugurated the new American embassy in Jerusalem. The celebration in Israel was palpable; the embassy move came amidst the national celebration of the 70th anniversary of the creation of the state. The streets filled with Jews of all sorts, cheering and dancing.

Meanwhile, on the Gaza border, Hamas broadened its monthlong campaign to break down the Israel border, staging border "protests" attended by thousands -- including terrorists who have used the supposed protests as a staging point for violent attacks on Israeli troops and territory. Palestinian terrorists have caused mass chaos, throwing Molotov cocktails at troops, attempting to rush the border, flinging explosives and tying incendiaries to kites in an attempt to set Israeli territory alight. The Israeli Defense Forces have responded with restraint. Despite this, a few dozen Palestinians have been killed, not the hundreds or thousands Hamas would presumably prefer.

But even as Yahya Sinwar, leader of Hamas in Gaza, suggested that "more than 100,000 people could storm the fence" between Israel and Gaza, and as 23-year-old Mohammed Mansoura announced, "We are excited to storm and get inside ... to kill, throw stones," the media covered the slow-rolling terror assault as a form of peaceful protest. A New York Times headline read "Israeli Troops Kill Dozens of Palestinian Protesters." A Wall Street Journal headline reads "Scores Killed, Thousands Injured as Palestinians Protest US Embassy Opening In Jerusalem."

Never mind that the riots had been going on for weeks preceding the embassy opening. Never mind that Hamas and the Palestinian Authority could quickly and permanently end all violence simply by stopping the violence. The real issue, according to the press, is President Trump and his Israeli friends.

What drives the leftist press's coverage? Simply put, antipathy to the West. Israel is seen as an outpost of colonialism by leftists, and has been since the 1967 war. Then-President Barack Obama expressed the view well in his 2009 speech in Cairo, suggesting that Israel's rationale relied on its "tragic history" that "culminated in an unprecedented Holocaust." In this view, the Palestinians were shunted aside in favor of providing national reparations to Jews; the Jews took their Western ways into the heart of a foreign region.

This isn't true. The living proof of that is Israel's eternal connection to Jerusalem. That's why both radical Muslims (including the Palestinian leadership) and the far left deny Israel's historic bond with its homeland and hope desperately to stop public recognition of that bond. If Israel exists because Jewish connection pre-existed everything else, then Israel isn't a new outpost of the West; it's the oldest center of the West. That's why Trump's announcement is important: It's a recognition that the West was founded on Jerusalem, rather than the other way around.