Are We on the Verge of Violence?

Ben Shapiro
|
Posted: Mar 15, 2017 12:01 AM
Share   Tweet
The opinions expressed by columnists are their own and do not necessarily represent the views of Townhall.com. 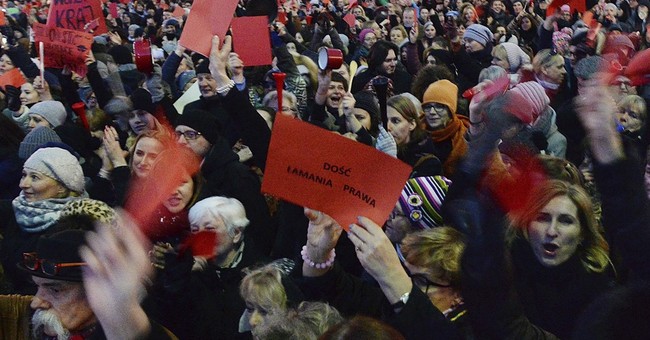 Trending
Two weeks ago, political scientist Charles Murray of the American Enterprise Institute went to speak at Middlebury College. There, he was quickly surrounded by protesters chanting: "Racist, sexist, anti-gay. Charles Murray, go away!" On his way out of the venue, a violent throng surrounded him and his security, as well as one of the university professors. She ended up in a neck brace. The same week, supporters of President Trump held a rally in Berkeley, California, and anti-Trump protesters threw smoke bombs and began punching people.

This sort of political violence is becoming more and more common around the country. I've personally been smuggled onto and off the California State University, Los Angeles campus during a near-riot caused by one of my speeches. When a fellow guest on CNN's HLN grabbed me by the back of the neck on national television in 2015, leftist commentators celebrated. In Berkeley, we saw Antifa rioters run roughshod through the town in honor of an upcoming visit by provocateur Milo Yiannopoulos. During the presidential campaign, we saw a Trump event in Chicago shut down by leftists who were intent on causing havoc, and we saw Trump supporters beaten in the streets in San Jose. Meanwhile, we saw Trump himself encouraging supporters to punch protesters and vowing to defend those who followed through from legal charges.

When despicable white supremacist Richard Spencer was punched on a city street in Washington D.C., the media quickly began asking whether it was OK to punch a Nazi. And many Americans concluded that it was fine. After all, Captain America did it!

Here's the problem: Once we start punching one another, there are only two ways such violence ends. First, an overarching powerful government could step in to stop the violence, to the cheers of the group represented by it. Second, one of the sides could literally club the other into submission. Both solutions are anti-American and frightening.

Not all ideas are created equal. Some are terrible and should be dismissed. But that's not the same thing as banning ideas or treating them with violence. In fact, the irony of those who claim to be doing political violence in the name of freedom is that political violence between citizens never ends in freedom -- it nearly always ends in tyranny.

The rise of the Nazis was preceded by heavy violence in Weimar Germany between communist bands and brownshirts. The two sides would go to each others' rallies and speeches and launch into serious bloodbaths in which people were killed. Brownshirts deliberately started violence with communists in order to draw supporters to their cause. They used that violence to create martyrs (Horst Wessel was the most famous) and prey on the reality of communist violence to seize power.

America isn't Weimar. Law and order still prevails. But if we want America to remain a free country, we're going to have to back away from violence, condemn it roundly on all sides and kill the notion that ideas must be fought with fists rather than other ideas.