Why Does the Left Go Easy on Dictators?

Ben Shapiro
|
Posted: Nov 30, 2016 12:01 AM
Share   Tweet
The opinions expressed by columnists are their own and do not necessarily represent the views of Townhall.com. 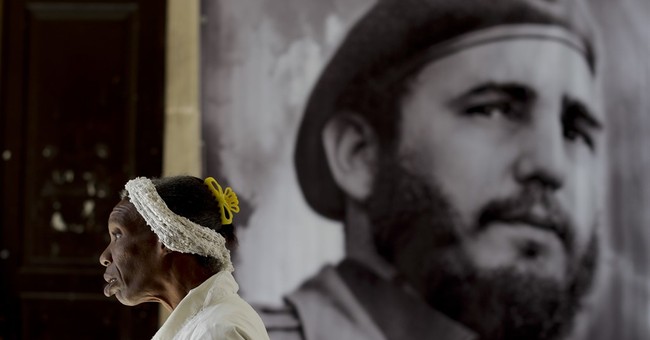 When evil Cuban dictator Fidel Castro finally died last Friday, the left seemed deeply ambivalent. President Obama noted "the countless ways in which Fidel Castro altered the course of individual lives, families, and of the Cuban nation," as though Castro had been some sort of high school guidance counselor. Former President Jimmy Carter recalled all the wonderful times he spent by the sea with Castro, the sun gleaming off the waves. He said, "We remember fondly our visits with him in Cuba and his love of his country." Canadian Prime Minister Justin Trudeau -- aka handsome Bernie Sanders -- described Castro as "remarkable ... a larger than life leader who served his people for almost half a century."

Meanwhile, around the world, dictators wept in solidarity with Castro. Palestinian Authority dictator Mahmoud Abbas, who is currently in the 11th year of a four-year term in office, ordered the flags dropped to half-staff around his trashed territory. Russian dictator Vladimir Putin sent a telegram to Cuban President Raul Castro, saying, "Free and independent Cuba, which (Fidel Castro) and his allies built, became an influential member of the international community and became an inspiring example for many countries and nations." Chinese dictator Xi Jinping called Castro "a close comrade and a sincere friend," adding, "His glorious image and great achievements will be recorded in history forever."

What were Castro's great achievements? He presided over the economic destruction of one of the most quickly developing countries in Latin America; he arrested and imprisoned hundreds of thousands of dissidents; he caused the self-imposed exile of millions of Cubans; he watched and participated in the drowning of thousands of Cubans attempting to escape his prison island; he worked with mass murderer Che Guevara to murder political opponents. Castro was, simply put, one of the worst people in a century full of awful human beings.

So why did the left emerge to pay its respects this week?

Because at least Castro sought utopia.

Radical leftism believes that the quest for a utopian world, a world free of unfairness, justifies any cruelty against individuals. Individual rights are obstacles to communal greatness. The bricks of the tower of Babel will be mortared with the blood of those sacrificed on behalf of the vision. That's because the state -- which is really just an extension of "the people," who only exist en masse, never as individuals -- is the source of all rights. No rights can be violated if the state declares them defunct.

That's why the left only pays token homage to those who suffer at the hands of history's greatest monsters -- as Josef Stalin apocryphally put it, you can't make an omelet without breaking eggs. No wonder the left defended Stalin all the way until news broke in 1956 that Soviet leader Nikita Khrushchev had criticized Stalin's purges. Until then, Walter Duranty of The New York Times had whitewashed the murder of millions in the Ukrainian Holodomor -- he declared that he had seen the future, and it worked. And Hollywood even portrayed Stalin's show trials in a positive light in "Mission to Moscow." Today, Hollywood produces fawning biopics like "Che" (directed by Steven Soderbergh) and "The Motorcycle Diaries" (produced by Robert Redford), and The New York Times titled its obituary for Castro, "A Revolutionary Who Defied the U.S. And Held Cuba in His Thrall."

Dictators everywhere are safe so long as leftism reigns. And leftism will continue to reign so long as men dream of a collective heaven on Earth rather than of individual rights protected from such utopian totalitarians.