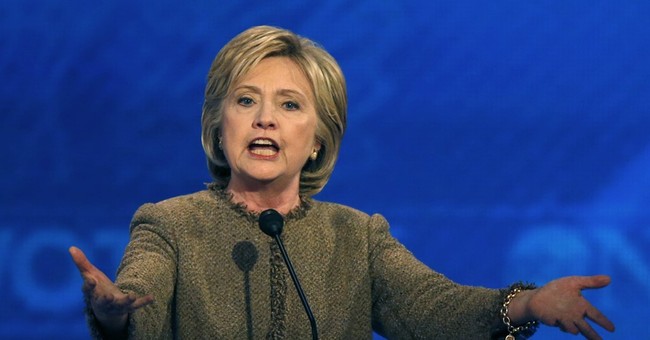 During the little-watched pre-Christmas Democratic debate, former Secretary of State Hillary Clinton accused Donald Trump of being the Islamic State group's chief recruiter. Relying on her penchant for blaming videos for Islamic evil, she stated that the Islamic State is "showing videos of Donald Trump insulting Islam and Muslims in order to recruit more radical jihadists."

The Islamic State's videos -- the ones that actually exist, not the ones Clinton makes up in her fevered imagination during debate pee breaks -- show that the group uses three main themes in its recruitment. First, it talks about Islamic prophecy. In a video released Nov. 24, titled "No Respite," the narrator explains, in English, over hypnotic chanting: "This is our (caliphate), in all its glory, remaining and expanding. ... It's a state built on the prophetic methodology, striving to follow the Quran and Sunna. ... We are men honored with Islam who climbed its peaks to perform jihad, answering the call to unite under one flag. This is the source of our glory: our obedience to our Lord. ... We only bow to Allah."

So much for President Barack Obama and Hillary Clinton's jabbering nonsensically about the Islamic State's having nothing to do with Islam.

Second, it talks about its string of victories. The video brags that the group's territory is "already greater than Britain, eight times the size of Belgium and 30 times the size of Qatar." It directly challenges America: "You claim to have the greatest army history has known. You may have the numbers and weapons, but your soldiers lack the will and resolve. Still scarred from their defeats in Afghanistan and Iraq, they return dead or suicidal, with over 6,500 of them killing themselves each year." It claims that America's airstrikes have accomplished nothing and that the United States' $250,000 missiles will never be able to defeat the Islamic State and its 50-cent bullets. It adds that the United States lacks the power to put boots on the ground.

In other words, it mocks the Obama administration's agenda. Without losses in Afghanistan and Iraq -- both idiotic and precipitous pullouts by the Obama team -- and without the constant drumbeat from the left that military men and women are poor victims of circumstance, the Islamic State wouldn't have this particular talking point.

Finally, the Islamic State talks about the emptiness of the West. The group contrasts its own allegiance to Allah with the West's allegiance to "a secular state -- built on man-made laws -- whose soldiers fight for the interests of ... legislators, liars, fornicators, corporations and for the freedoms of sodomites." The video flashes pictures of Obama, George W. Bush and Bill Clinton. No Trump.

It concludes: "Bring it on, all of you. Your numbers only increase us in faith, and we're counting your banners, which our prophet said would reach 80 in number, and then the flames of war will finally burn you on the hills of Dabiq. Bring it on, for we echo the mighty call of our prophets. ... Show us no respite. Our ally is the greatest. He is Allah, and all glory belongs to him." The reference to Dabiq is to an apocalyptic site in Syria. According to Islamic teachings, it is supposed to host a battle between the Christians and the Muslims that will usher in Armageddon.