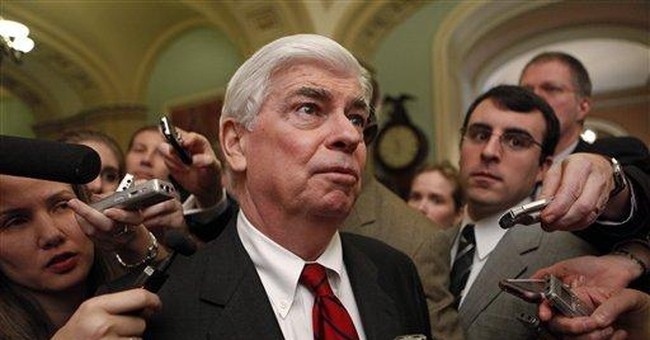 Congressional Democrats, after all their faux wrangling, open bribery and bully tactics, are poised to reach agreement on a massive makeover of the American health system. This makeover will bankrupt the insurance companies, raise premiums, and eventually lead to the full nationalization of health care.

As Sen. Tom Harkin (D-Iowa) explained the morning after the Senate bill passed, "What we're building here is not a mansion, it's a starter home … it has room for expansion and additions in the future. If we don't start the starter home, we'll never get there. So this is not the end of health care reform, this is the beginning of health care reform."

And yet all hope is not yet lost. The vast majority of Americans who do not wish to pay higher taxes in order to create medical DMVs can still do something. If this is the beginning of the full-scale implementation of socialized health care, we must stop it in its tracks. Here is a basic, three-step plan for putting an end to the Democrats' sickening "beginning":

1. Encourage doctors to stop accepting both health insurance and Medicare. The Democrats' planned system only works if doctors continue to live off the health insurance and Medicare dole. Good doctors can work outside the system and do better than they would inside it, while providing the quality care Americans deserve. Their profit margins won't be set by the government, and they will be able to charge variable rates for different services and different patients. This is as it should be.

There is no reason that doctors should be charging hundreds of dollars for a 15-minute checkup; doctors only charge outrageous amounts because they know that the heavily regulated health insurers will cover those losses by raising premiums on the healthy. If massive numbers of people operate on a cash-in-hand, pay-by-appointment basis, doctors can make money while providing care at less cost. Competition will lower costs, even for catastrophic care. You'll be paying $25 for a 15-minute checkup, just as your grandparents did before the advent of employer-provided insurance.

2. Tie up the health care legislation in court. Every American who is reasonably healthy should refuse to buy health insurance. When the government fines you, take them to court on constitutional grounds. For too long, conservatives have played by the Marquis of Queensbury rules, content to let liberals run to court at every opportunity while complaining meekly about the death of Constitutionalism. It's time to take the gloves off. Every federal district in the country should receive a well-presented lawsuit from at least one fined citizen.

Forcing you to buy health insurance violates the Fifth Amendment to the Constitution, which provides that "private property [shall not] be taken for public use, without just compensation." In this case, private property is being taken for private use -- your health care, supposedly. Never before in American history has the government forced Americans to buy anything. Using this principle, why couldn't the government force you to buy GM cars? Or wind turbines? Or posters of Obama?

3. Stop electing socialists. This is the most important element, of course. The first two steps of this three-step plan will do heavy damage to both the health insurance companies and, by extension, the Democrats' plans. When the health insurers begin to flounder, Democrats will immediately begin caterwauling about the need to fully nationalize the health care system. Pay them no mind. The government created the problem, and the government will not fix it. Democrats are not concerned about your health care -- they are only concerned with creating a massive entitlement program that will cement their lock on power for the next 50 years.

Only an infusion of capitalism and entrepreneurship can solve the problem of skyrocketing health care costs. And only adherence to constitutional principles can ensure that infusion. Any government that controls health care has total mastery of its population. Our government must not be given that mastery; our founding principles reject such mastery. It's time to exercise a bit of backbone in defense of our values -- more backbone than we exercised in electing a bunch of power-hungry liars and thieves to high office.