Obama in Afghanistan: Losing a War to Reassure his Re-Election 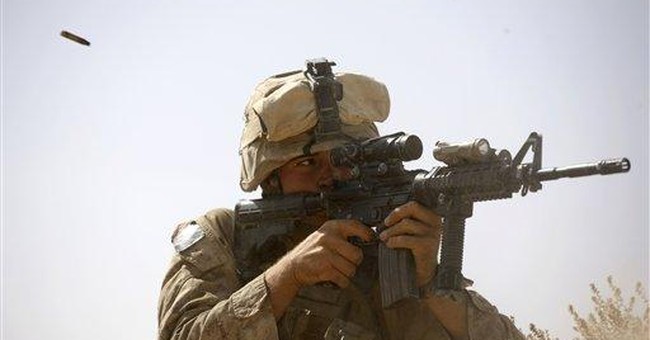 On the weekend of Oct. 3, Taliban fighters in northern Afghanistan launched a mini-Tet Offensive against American troop bases. Over 300 terrorists and their allies stormed the bases in an attack that started in a nearby mosque, which had been used to store weapons and ammunition. While the American soldiers repelled the invaders, they suffered heavy casualties: eight deaths, plus two Afghan Army officers killed and 12 missing Afghan National Policemen. It was one of the deadliest days of fighting since the start of the war.

For the last several weeks, high-ranking members of the military establishment have called for a troop "surge" in Afghanistan similar to the surge in Iraq. Last week, Gen. Stanley McChrystal, promoted by Obama in June 2009 to command all U.S. forces in Afghanistan, rejected Vice President Joe Biden's suggestion that allied forces rely on airstrikes rather than increased troop levels in Afghanistan. "A strategy that does not leave Afghanistan in a stable position is probably a short-sighted strategy," McChrystal stated publicly. He averred in Newsweek that milquetoast measures were destined for failure, saying, "You can't hope to contain the fire by letting just half the building burn."

Adm. Mike Mullen, chairman of the Joint Chiefs of Staff, has said that "time is not on our side." Gen. David Petraeus has shed light on the Obama administration's slow movement, stating that "we are not yet at the point where we are discussing resources or numbers. Even Secretary of Defense Robert Gates, an Obama flak who criticized McChrystal's openness, endorses McChrystal's view: "Because of our inability and the inability, frankly, of our allies, (for putting) enough troops into Afghanistan, the Taliban do have the momentum right now, it seems."

President Obama's response has been anger. He has not even addressed McChrystal's or Mullen's or Gates' concerns; instead, he has focused on targeting McChrystal personally for his temerity in going public with his suggestions. While in Denmark to push his failed bid for a Chicago 2016 Olympics, he summoned McChrystal to him, where he proceeded to read him the riot act aboard Air Force One.

There is a reason for Obama's anger: He is more interested in winning the public relations battle than winning the war in Afghanistan, particularly since his possible presidential opposition in 2012 includes both Petraeus and McChrystal. McChrystal has reportedly discussed quitting if he does not receive the troops he needs; Petraeus, if he continues to be marginalized by the Obama administration, may follow the same path.

Obama, therefore, has two options: cow both Petraeus and McChrystal into silence or smear them. He has tried the first option. It will not be long before he opts for the second. Two days after a New York Times article suggested Petraeus' presidential ambitions in 2012, the Times somehow got wind of Petraeus' treatments for prostate cancer -- treatments only the White House knew about. The Times then solicited confirmation from Petraeus' office. This sudden revelation has the Obama team's fingerprints all over it.

Instead of focusing on his 2012 rivals, Obama should be focused on victory. Instead of focusing on winning the political battles, Obama should focus on winning the very real war -- a war in which our soldiers are fighting and dying as we speak. But President Obama has demonstrated time and time again that he cares less about American victory on the world stage than he does about his personal prestige and power.

Obama has no grand strategy to win the war in Afghanistan, nor even a strategy to achieve a peace-with-honor pullout. He has only his Chicago tactics, which he will use to destroy any military man or woman who so much as hints to the American public that Obama's Afghan plan is flawed.