Barack Obama: Looking for Love in All the Wrong Places 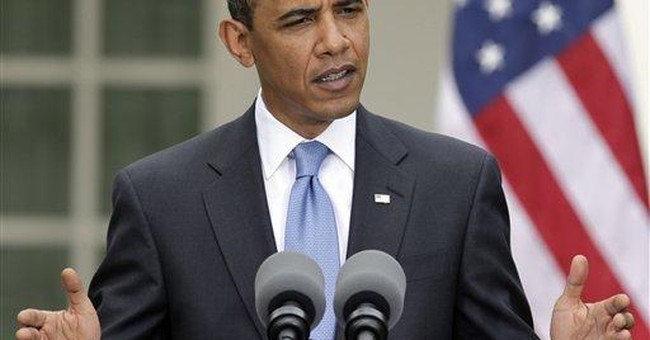 President Barack Obama’s ego is like an agitated puppy: it requires constant attention and a good deal of petting. Fortunately for Obama, world leaders recognize his insecurities and cater to them. Unfortunately for America, world leaders have realized that by catering to those insecurities, they can keep the president distracted just long enough to do what they want. The president is like an unattractive high school girl desperately looking for a date to the prom: Any boor can take her for a few compliments. It’s only when she arrives home the next morning, deflowered, that she realizes she’s been suckered.

While the world community declaims Obama as a global hero, they ignore his wishes and do precisely what they want; while Obama savors the sickly sweet praise, he ignores their malfeasance. There’s only one problem: He’s going to feel used in the morning.

When Obama was elected, President Mahmoud Ahmadinejad of Iran sent Obama a personal letter of congratulations. In March, Syrian President Bashar Assad acclaimed Obama as a “man of his word.” On June 10, President Hosni Mubarak of Egypt praised Obama as “someone who differs from other presidents of the United States.” Palestinian terror group Hamas trumpeted Obama’s election as a “historic victory for the world.” King Abdullah of Saudi Arabia called Obama “a distinguished man who deserves to be in this position.” President Hu of China described Obama’s election as the beginning of a “new historic era.” Prime Minister Vladimir Putin of Russia said Obama was “an open, sincere person.” The Europeans unanimously hailed Obama as a global leader and a champion of fairness.

For his part, Obama showers friendliness upon these sycophants. Obama has repeatedly stated that he wishes to negotiate with Iran, and he has clearly implied that military action against Iran is off the table; he has already blessed Iran’s “peaceful” nuclear program and he refuses to OK sanctions against Iran even in the aftermath of the ayatollahs’ crackdown on the Iranian population. Obama has elevated terror sponsor and Lebanon-rapist Syria to high international rank, with envoy George Mitchell declaring that Syria has “an integral role to play in reaching comprehensive peace.” Obama deigned to rest his holy presence on stage in Cairo, Egypt, granting that despotic regime a legitimacy it does not deserve. Anti-Semite extraordinaire Jimmy Carter has met repeatedly with Hamas -- and with Obama, presumably carrying Hamas’ handwritten instructions. Secretary of the Treasury Timothy Geithner, Secretary of State Hillary Rodham Clinton, and Speaker of the House Nancy Pelosi have already feted China for its role in propping up the U.S. economy. Obama famously “reset” relations with Russia. And Obama kowtowed to the Europeans, stating that Americans failed to respect their “leading role in the world.”

For his troubles, Obama has gotten a stocking chockfull of coal. Iran’s military-directed nuclear program continues apace; the Iranians recently selected/elected President Ahmadinejad again, despite Obama’s direct appeals to the Iranian people. Syria continues to support Hezbollah. Egypt announced this week that it would never accept the existence of the State of Israel. Hamas announced that they would not accept any of Israel’s positions. China is supporting the North Korean regime despite North Korea’s threats of nuclear war. Russia is undermining Eastern European security. And the Europeans have refused to help our efforts in Afghanistan.

We have a president who is “loved” and a country that is held to international scorn. Does anyone miss a time when America was respected and our president disliked?

Machiavelli asked whether it was more important for a prince to be loved or respected. “(M)en loving according to their own will and fearing according to that of the prince,” wrote Machiavelli, “a wise prince should establish himself on that which is in his own control and not in that of others; he must endeavor only to avoid hatred, as is noted.” When a prince -- or a world leader -- endeavors to be loved rather than feared, he falls into the trap of attempting to please everyone. That is Obama to a T. He is more interested in applause than freedom or American security.