Sean Penn and the Hollywood/Government Complex 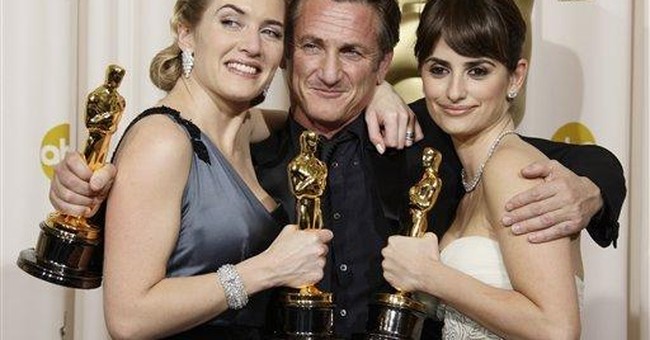 It is easy to mock the Academy Awards as an exercise in self-aggrandizement and decadent stupidity. It is easy to dismiss it as an increasingly irrelevant awards ceremony run by radical leftists. It is easy to ignore it.

That would be an enormous mistake.

Silly political statements are a hallmark of the Oscars. Sacheen Littlefeather, aka Marie Cruz, refused an Oscar on behalf of Marlon Brando in 1973; Vanessa Redgrave proclaimed that her pro-Palestinian viewpoint was threatened by “Zionist hoodlums” after winning an Oscar in 1978; Oliver Stone ripped the Vietnam War after winning an Oscar for “Platoon” in 1987. And that’s only scratching the surface.

In the past, this twittering could be written off as simpleminded Hollywoodites indulging their egos. The problem is this: While empty-headed line-readers with socialist political leanings used to be out of the mainstream, they’re now open public relations flunkies of the Obama administration. They provide Obama with cultural cover -- and Obama bankrolls them and legitimizes them in return.

On Sunday night, Sean Penn utilized his “Milk” win to lecture Prop. 8 supporters. Traditional marriage voters should “sit and reflect and anticipate their great shame and the shame in their grandchildren’s eyes,” Penn spat. Strangely, Penn then praised anti-gay marriage advocate Obama -- an “elegant man.” When questioned later about this apparent contradiction, Penn was circumspect; Obama, he said, was busy trying to stop wars and help the economy. “Those two emergencies, need to be taken care of without me making too much comment about how we approach civil rights,” blabbed Penn, demonstrating the courage of his convictions. It’s one thing to attack anti-gay marriage Mormons; it’s another to ask a liberal president to stand up for gay rights.

Penn’s decision not to “speak truth to power” is a calculated one. Where he once called Obama’s voting record “phenomenally inhuman and unconstitutional,” he now refuses to undercut Obama. That couldn’t have anything to do with the Democratic Party’s consistent support subsidies to Hollywood, could it? It couldn’t have anything to do with a $470 million tax break for Hollywood producers drafted by Democrats and signed into law by President George W Bush on Oct. 3, 2008, could it? Or the proposed $246 million tax break for Hollywood producers originally shoehorned into the stimulus package by Democrats (and later cut by Republicans)?

Penn’s hypocrisy couldn’t have anything to do with the Obama administration’s legitimization of actor/politicians like George Clooney, who just this week met with both Obama and Vice President Joe Biden to advise them on the situation in Darfur. Clooney, you might remember, made a Penn-like speech at the 2006 Oscars, in which he bragged about Hollywood’s social record: “We're the ones who talked about AIDS when it was just being whispered, and we talked about civil rights when it wasn't really popular. … I’m proud to be a part of this academy. Proud to be part of this community, and proud to be out of touch.” Now Clooney is in touch with the White House.

Penn’s defense of the Democratic Party couldn’t have anything to do with the fact that America now faces the clear prospect of an Eisenhoweresque government/Hollywood complex. Liberal politicians win Oscars and Emmys; liberal actors get senatorial seats. Hollywood producers get taxpayer cash. Al Franken and former Vice President Al Gore are part of the same organism. Barack Obama and George Clooney run in the same circles -- and Obama seeks Clooney’s advice on matters ranging from Sudan to the Middle East crisis.

The biggest problem with the incestuous relationship between Hollywood and the Democratic Party isn’t their mutual back scratching -- it’s the power of Hollywood imagery combined with a particular political agenda. Hollywood has put itself on World War II wartime footing -- only this time, they’re fighting a war against conservatives. They destroyed Alaska Gov. Sarah Palin. Now they’re aiming at the rest of the Obama opponents. No dissent will be tolerated; no criticism will be brooked. Even Penn must shut his mouth when it comes to Obama.

The scary part of the Academy Awards, then, wasn’t Penn’s inane statements about gay marriage. After all, it’s difficult to take Penn seriously on marital solidity when his first wife was Madonna. The scary part about the Academy Awards was that it, like all other Hollywood products, has become a campaign ad for Obama. It’s no coincidence that Beyonce sang “At Last” at both the Oscars and the Obama Inauguration. To Hollywood, they’re two parts of the same political-cultural whole.