Bay Buchanan
|
Posted: Aug 03, 2018 12:01 AM
Share   Tweet
The opinions expressed by columnists are their own and do not necessarily represent the views of Townhall.com. 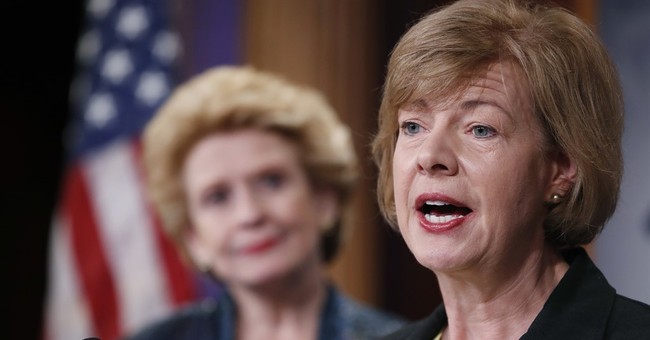 Senator Tammy Baldwin is exposing herself as out of touch with Wisconsinites over President Trump’s Supreme Court nominee Brett Kavanaugh.

Instead of waiting to carefully evaluate Kavanaugh’s record,Baldwin plans to obstruct and vote against his confirmation. “I don't have confidence that Judge Kavanaugh ... [can be] impartial and independent,” she said in a statement.

It’s clear the Senator is choosing to side with Senate Minority Leader Chuck Schumer and Washington Democrats instead of the good people of Wisconsin.

Baldwin is eager to jump to conclusions and portray President Trump’s nominee as an agenda-driven partisan, but Kavanaugh’s record paints an entirely different picture.

Judge Kavanaugh may very well be one of the most qualified nominees ever chosen to sit on the Supreme Court. Kavanaugh studied at the prestigious Yale Law School and clerked for the departing Supreme Court Justice Anthony Kennedy. He currently serves as a judge on the United States Court of Appeals for the District of Columbia Circuit, which is often referred to as the “second highest court in the land.”

Throughout his career, Judge Kavanaugh has shown an uncanny ability to consider each individual case based on the Constitution as originally written, not based on his personal political views.

Despite Kavanaugh’s credentials, Senator Baldwin is once again embracing the agenda of the left-wing radicals who have hijacked the Democrat Party and are seeking to derail President Trump’s outstanding Supreme Court nominee at all costs. Baldwin’s voting record proves her radical allegiance.

For instance, Baldwin has voted with Schumer nearly 95 percent of the time, voting No on President Trump’s tax plan, No on repealing and replacing Obamacare, No on cracking down on sanctuary cities, and No on repealing Obama’s anti-energy methane rule. Nearly every step of the way, Senator Baldwin has obstructed President Trump’s agenda, voting against him 79 percent of the time.

This track record reveals how Senator Baldwin is more aligned with her colleagues in the Senate, Bernie Sanders and Elizabeth Warren, than she is her own constituents in Wisconsin.

That’s why she fits in well so well with the rest of her party, whose new direction includes abolishing ICE, increasing taxes on the middle-class, and bringing back Obama-era regulations that stifle small business growth.

What’s most disappointing is that Senator Baldwin won’t even give Judge Kavanaugh a fair hearing. Instead of reasonable debate about Kavanaugh’s qualifications, we get liberal outrage and obstruction from her and the rest of the Democrats. The party has even publicly stated, “The SCOTUS consideration of Judge Brett Kavanaugh ... represents a clear and present danger to the safety, health, and wellbeing of Americans.”

Wisconsin, the state that helped elect President Trump in 2016, should keep all of this in mind in November whenBaldwin is up for reelection.

Senator Baldwin has already made her decision, but the good people of Wisconsin haven’t. There’s still time to change course and elect someone who hasn’t sworn outright allegiance to Chuck Schumer and the radical extremists blocking a great choice for the Supreme Court.