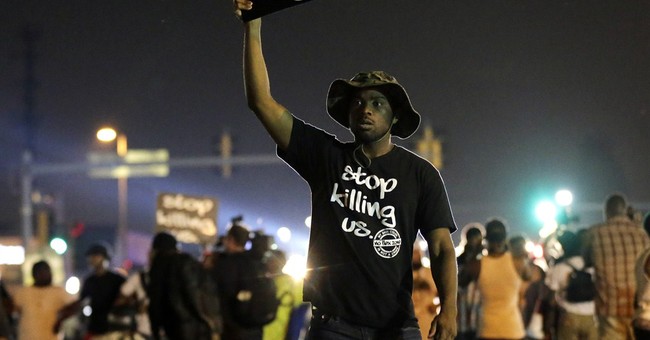 The events unfolding in Ferguson, Missouri, represent why every single black American should, without equivocation, reject the big government view of America. Without doubt, the savior of the African American community will not be any government, neither local nor state nor federal, nor will that savior be anyone within that particular government who shares our pigmentation. In truth, big government is the primary cause of the psychological scars and emotional pain so deeply rooted within the African American community today.

Today, we see new abuses of civil authority that are hurting the black community. Big government liberals in New York City instituted FDA-style regulations and taxation of cigarettes so severe that Eric Garner died at the hands of police last month, choked to death, for the crime of selling untaxed cigarettes. In a very real way, one could argue that it was big government that killed Eric Garner.

A parallel situation is unfolding today in Ferguson. The popular news media focus on race relations in the shooting death of 18-year old Michael Brown but that is simplistic and just a tiny factor in the unrest there. The real culprit is a government too big to understand that its core mission is to protect and serve, rather than using military-grade equipment against a civilian population. This too is a by-product of big government. It was a Democrat Congress that started this march toward equipping local police departments as a quasi-military force in 1990 under Sec. 1208 of the National Defense Authorization Act.

What began as an effort to dispose of surplus military equipment gave rise to police militarization and the violence we’re seeing today in Ferguson. Simply put, big government equals big beatings. This is not to say that black Americans should march en masse to the Republican Party; not hardly. Much of the sentiment underlying the up-arming of local police arose from GOP efforts to fight a war on drugs. However, what we should realize is the broader libertarian argument; that more government means less freedom.

It’s a powerful argument, one the African American community can amplify more than any other. The first step is to stop labeling blacks who think outside the liberal box as Uncle Toms or sell-outs. Dr. Condoleezza Rice and Herman Cain may not always be right but they’re certainly not always wrong. And even though we may not agree with all black libertarian thinkers, there must be seat at the table for the Cornell Wests and Ben Carsons who are stepping forward. To exclude them invites further destruction of black America.

It is often said that in politics, we must “dance with the one what brung us.” Black America may believe they have a friend in big government but that is precisely what created the chaos and heartache of Ferguson, and the time has come to consider changing dance partners. Sitting here in the comfortableness of my New York City abode, wracked with despair, I can see how big government is hopelessly fracturing our nation. Ferguson is the latest fissure. Where it might end is anyone’s guess but this I know: it will not stop until African Americans realize the lie of plantation liberalism and stand up for genuine liberty.