What If There Were Too Many Jobs? 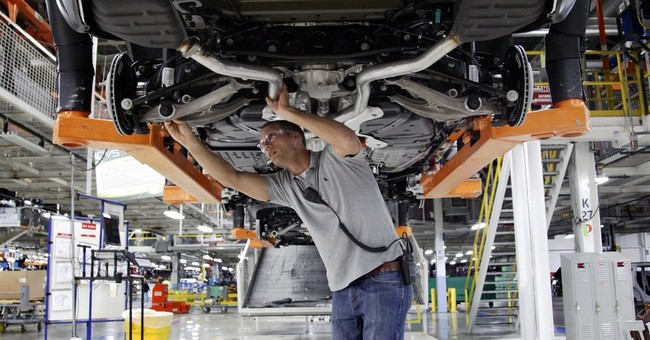 What could possibly help elevate the earnings of entry-level workers better than a new minimum wage law? How about a thriving economy and near-zero unemployment!

President John F. Kennedy once observed that improvements in the economy overall serve the interests of workers overall, and stated that "a rising tide lifts all ships." Today members of his own Democrat party tend to gravitate more to the rhetoric of Karl Marx ("abolish all private property" seems closer to President Obama's worldview than does JFK), and far too few Republicans care about Kennedy’s vision.

But the wisdom of Kennedy is alive and well. Consider two very different regions of the U.S. where, right now, prosperity for those at the top is producing improvements for everybody.

First, there's North Dakota. Just this last week CNBC.Com reported - again - that the booming oil industry has produced a hyperkinetic "24-7" economy throughout the state, including in the relatively small place known as Williston. As a consequence, unemployment in that city of roughly 20,000 residents sits at approximately .9%, which in turn has produced a labor shortage.

As "big oil" thrives there, so do entry-level workers. Fast food restaurants, with plenty of jobs that require little or no prior training or skill, offer anywhere from $11 to $20 per hour to attract workers. A McDonalds franchisee that CNBC interviewed told of offering $300.00 "signing bonues" to new employees.

How can this be? "Big oil" provides a product that the entire world needs, but also employs people at nearly every level of skill. And with the petroleum energy industry taking up the majority of low skilled workers and paying them relatively well in Williston, other industries that need low-skilled workers have to offer well above North Dakota's $7.25/per hour minimum wage in order to get anybody to work.

This is to say that the oil industry has so many jobs available that even the worker of the lowest skill level has bargaining power, and can demand more money for their time and services. The "tide" of the oil industry is rising in North Dakota, and and the "little boats" of entry level workers are being lifted.

But also consider what's happening in the state of California. In the tech-centric city of San Francisco, the city council decided to put on the November ballot a proposal that, if voters approve it, would gradually raise the minimum wage from the current $10.74 to $12.25 in 2015, to $13 in 2016 and to $15 in 2018.

A recent "news" article in the San Francisco Chronicle lamented that many employers already pay entry-level workers well above the minimum wage mandates, and that $15.00 is still "not enough to live on."

Yet on some level, the North Dakota phenomenon is the normal state of things in San Francisco: tech, and other industries that provide essential products and services employ so many people that even low-skilled workers experience some of the benefit.

Most journalists would never ask this question, but it's an important question nonetheless: should Americans use the force of government to mandate that entry-level jobs pay enough money "to live on?" There is, after all, a reason why we call these jobs "entry-level" - they require very little prior training or preparation, and often require no work history whatsoever. Such jobs provide a beginning in the labor market, but never intended to provide one with a life-long career.

Advocates of higher minimum wage laws like to ignore the many opportunities that American adults already have to enhance their skills and to prepare for better employment opportunities. The voters of San Francisco, for example, will likely ignore the fact that California tax payers already fund the world's largest system of higher education, the California Community College System, where one can train for an entire new career. Over $9 billion over hard-earned tax dollars get spent on the 112-campus system every year.

A "rising tide" in America could lift ships beyond anybody's Obama-esque minimum wage dreams. But understanding the wisdom of JFK will need to come first.