Legacies Of The Greatest Generation Live On 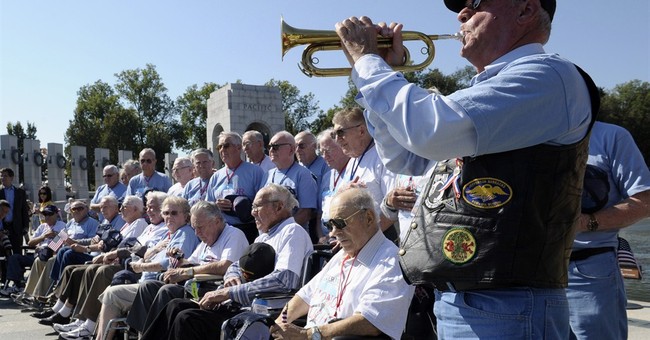 (Author’s Note: Austin Hill co-wrote this editorial with Dennis Mansfield, Author of “Finding Malone,” a real-life story of fathers, sons, and valor on the battlefields of World War II.)

It’s a day to honor those who have served in our military, yes, but it is also a day when many American civilians enjoy a holiday from their labors.

But whether one chooses work or rest on this day, one truth remains: there would be no national holiday, nor would there be the freedom to work and be productive, without the sacrifice of our veterans – now and in the future.

Case in point: Cadet Colin Mansfield will graduate from the United States Military Academy at West Point in May 2014. As with all who serve he endured an age-old tradition called boot camp - where new recruits have their civilian parts disassembled – and their newly issued G.I. parts assembled.

It’s impossible to gain an understanding of military small unit tactics, if one has never gone through boot camp. Yet, do not for a minute think that this self-evident truth lessens the sincerity of those civilians who applaud from the sidelines. They are not alone. Today’s veterans, like Cadet Mansfield, must also applaud from the sidelines and admit something, too: twenty-two-year-old men save the world in 1945.

Historian Stephen Ambrose showed us they were brothers fighting for their brothers. Many returned home & chose not to talk about it. Their silence often led to frustration, which then became harshness toward their family members, causing deep strain on all.

We’re losing the greatest generation – yet, the impactful legacies of such strong soldiers are living on vibrantly through their families & their stories.

In economic terms, the private ownership of “property” means far more than merely possessing real estate (although the right to own land is a key component of the concept). More broadly, private property rights involve the ability of the individual to own the means of economic production.

Whether those means are of an industrial, intellectual, or virtual nature, an individual’s right to harness them, utilize them, and to produce wealth with them, apart from governments and other collective bodies dictating the process or confiscating the spoils, is key to the survival of a free society.

The heroes of World War II well understood that when this right to private property is compromised, the other rights of the individual soon collapse. After all, Adolph Hitler’s reign of terror began with the confiscation of private property from merely one people group - the Jews - yet it didn’t end until over 60 million people, roughly 2.5% of the world’s population at that time, had lost their lives.

With this in mind, allow the stories of two WWII veterans – an Army medic & a Navy seaman – to underscore the point.

Anthony J. Malone was from Middletown, CT. He was a rare breed—a soldier who joined the peacetime US Army in 1938 between the wars. He was issued a World War I uniform and a doughboy helmet that looked more British than American.

He trained to be a medic. Tony Malone was a soldier without a war.

Men ran to enlist, standing in line for hours. Tony Malone was already there. His wartime duties would take him to places that today’s history books reference with a sense of awe: fighting in North Africa, Sicily, D-Day, and ultimately to Hitler’s Lair. His helmet went with him.

The Navy seaman was Bill Mansfield from Grant’s Pass, OR. He joined at the end of World War II, seeing no combat. As the war ended, he joined the US Army Air Forces and was deployed to Korea during that conflict. Like SGT Malone, CMSGT Mansfield became anonymous to the pages of history but not to the small groups they commanded.

When World War II ended, Malone discarded his helmet and returned home to Connecticut. Unbeknownst to SGT Malone his helmet became a symbol of a by-gone era and the beginning of a legacy for generations to come. His helmet travelled undetected for 64 years till 2009 when Boise, ID high school students researched and found Malone. He had passed away 8 years earlier – one of a 1000 or so World War II vets that had died on a particular day.

Bill Mansfield passed away on another day in 2012, equally anonymous and yet equally impactful on the lives of his small band of brothers.

Malone lived through World War II with his small unit of men – they protected him, and he them. His heirs lived to see his legacy continue through the silent witness of a helmet.

Mansfield lived to see healing be a part of his personal relationship to his estranged son. They formed a deep friendship. His legacy lives on through a soon-to-be West Point - his grandson - who will be sworn into the US Army in 2014, almost seventy years after he entered boot camp and World War II.

With each passing year, fewer and fewer Americans have such a direct, multi-generational connection to World War II. Yet the domestic and global free trade that empowers our economy and enables our very way of life is a legacy from our veterans that is ever-present, if only we’ll stop to consider it.