Is President Obama At War With America? 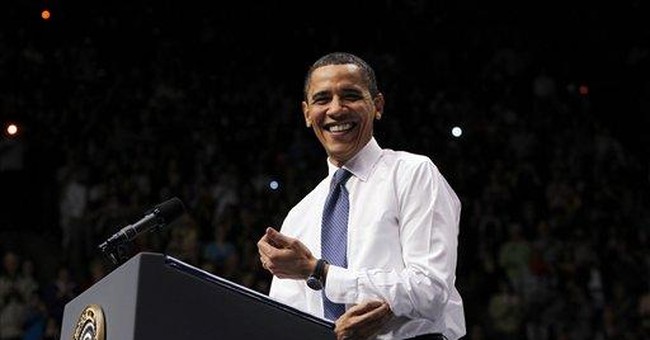 If a frontal assault on the foundational principals and values of American life can qualify as being “at war” - then yes, Barack Obama is in combat with our country. And while the belligerence of both his administration and his party’s congressional leadership have seemingly created a sense of alarm across the U.S., their apparent disregard for their own self-inflicted political damage is all the more staggering.

Taking aim at America’s foundations has impacted us both here at home, and abroad. European allies France and England have both made note of our President’s “short shrift” treatment over the past fourteen months, while earlier this month French President Nicolas Sarkozy chastised Obama for his protectionist, anti-free trade policies ( “this is not the right way to behave” Sarkozy told our President). And just last week Vice President Biden took U.S.-Israel relations to a new low point by criticizing the nation on their own soil.

But domestically, Obama’s greatest offense to American life is fundamentally economic in its nature. And at its root, his assault on our sensibilities is best described in terms that he himself has used to criticize others.

In a quickly produced campaign commercial back in the Fall of 2008, candidate Obama addressed the then- melting down American financial system, stating that “this crisis serves as a stark reminder of the failures of crony capitalism, and an economic philosophy that sees any regulation at all as unwise and unnecessary…” At that moment in time, long-standing American financial institutions were being crushed, mostly by their overexposure to sub-prime mortgages, while the stock market was tumbling precipitously.

Was “cronyism” in the financial system really our problem back then? Arguably it was one of many problems at that time, although Obama’s insinuation that our capitalistic free market economy is “un-regulated” was phony (completely un-regulated capitalism does not exist).

But today, cronyism is so flagrant and blatant at the highest ranks of our government, that the President and the congress have lost the confidence and the trust of both America’s cultural “right” and “left.” The stunning, “we’ll-stop-at-nothing” fight to take-over the healthcare industry and the medical profession has put Obama-styled cronyism on full display – and therein lies the greatest assault on America.

The cronyism, however, didn’t begin with the healthcare fight. After taking office, President Obama got to work right away buying-off people who would serve his interests, as he continued the destructive precedent established by George W. Bush and handed over billions of our tax dollars to Chrysler and General Motors. He then established his special “Automotive Task Force,” and appointed as the head of the task force Steve Rattner, a Wall Street investor with no experience in the car business but with lots of experience in raising campaign money for Obama and Democrats.

When GM and Chrysler ended-up in bankruptcy, President Obama insisted that everybody involved needed to “sacrifice,” yet the only people to experience a loss were the companies’ secured creditors. The Obama Administration used the full power of the White House to force the creditors to accept debt payment of thirty cents on the dollar, and then during the “re-structuring” of the companies managed to have chunks of each corporation “gifted” to the United Auto Workers Union (the UAW currently owns about 17% of GM, and slightly over 50% of Chrysler).

President Obama had a good reason to provide “gifts” to the UAW – labor union members frequently make great, loyal, campaign foot soldiers for Democrats. And for this reason it was no surprise when President Obama negotiated an exemption from the mandates of his nationalized healthcare plan for UAW members – they already receive healthcare benefits, and it made no sense to entangle into government healthcare a group of people who could be politically beneficial to Barack Obama.

Then there are the “gifts” to individual members of Congress. The “Louisiana purchase” with Senator Mary Landrieu and the “Cornhusker kickback” happened months ago. Yet all within the last week, we saw Ohio Congressman Dennis Kucinich go from a “no” to a “yes” vote on Obamacare after his wife was given a job working for Michelle Obama. And the Obama Administration used the power of the Department of the Interior to expand California’s water allocations, in exchange for the votes of on-the-fence Representatives Costa and Cardoza.

And why, exactly, does the Obamacare agenda require all Americans to buy health insurance? Using the force of government to create more “demand” for their product was a great way for President Obama to garner the political support of the insurance industry.

Yet at the epicenter of all of this – all the bribes, manipulations, and heavy-handed mandates – is the narrow, political self-interest of one man: Barack Obama. America’s cultural “right” decries the loss of freedom and the rise of abusive government, while the “left” decries a government that lines the pockets of for-profit corporations (companies that are presumed to be “greedy”), all for the benefit of one self-serving politician.