America's Next Wars: Lose One, Hold One?

Austin Bay
|
Posted: May 18, 2022 12:01 AM
Share   Tweet
The opinions expressed by columnists are their own and do not necessarily represent the views of Townhall.com. 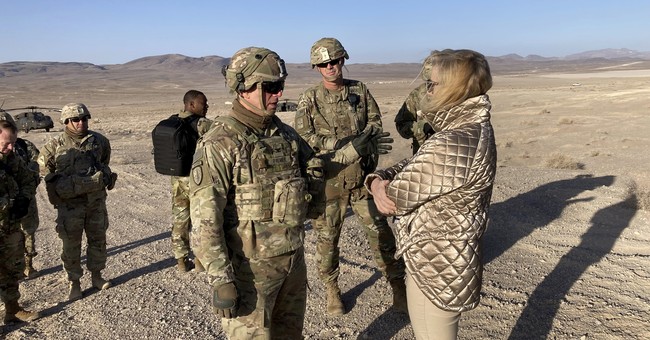 Can the United States only fight one war with a chance of winning?

According to Adm. Mike Gilday

, the chief of naval operations (CNO, Navy's senior officer) the answer is yes -- at least when it comes to the U.S. Navy fighting its share of the war.

According to Stars and Stripes, during a May 12 Senate Armed Services Committee hearing Sen. Josh Hawley, R-Mo, asked Gilday: "What would the impact be on the Navy's ability to meet its operational requirements in (Europe) if we had to withhold Navy forces from Europe in order to deter Chinese aggression in (the Pacific)?"

Gilday replied that the current fleet of about 298 ships "is not sized to handle two simultaneous conflicts." The Navy is "sized to fight one and keep a second adversary in check, but in terms of two all-out conflicts, we are not sized for that."

Given the genuine threat posed by communist China -- whose navy is already larger than the U.S. Navy -- this is a jaw-dropping statement for the Navy's senior officer to say on the record.

Consider the information and narrative warfare elements -- and the Biden administration emphasizes "perception" above all. At the definite minimum Gilday's assessments rates as a diplomatic perception faux pas -- it signals weakness. At the hyperbolic maximum -- admittedly extreme -- Beijing's imperialist dictatorship could read it as an invitation to attack Taiwan. Given Russia's invasion of Ukraine, never dismiss hyperbolic and idiotic aggression by a dictatorship as impossible.

Alas -- Gilday exposes an unfortunate vulnerability. My American political explanation: He wants more money for the Navy and its current acquisition programs.

Another reason? Everyone sentient on the Senate Armed Services Committee knows the U.S. military is structured to "fight one and hold one."

The first "one" means a must-win war.

In July 2001 then-Secretary of Defense Donald Rumsfeld, through a Pentagon leak, indicated America would no longer field -- and pay for -- a military built to fight a "two war strategy."

In the late 1990s a bipartisan Washington consensus believed the U.S. no longer confronted the strategic threat of fighting simultaneous major wars in the Atlantic/Europe and in the Pacific/Asia.

In a column written in July 2001 I suggested Rumsfeld was telling America that World War II and its Cold War aftermath had finally come to a strategic endpoint. The Cold War was World War II's long goodbye, with U.S. and Russian troops facing each other in a divided Germany. America's direct involvement in Asian tumults like the Korean and Vietnam wars were the fallout of defeating Japan -- and then confronting communist China and the USSR.

To be fair to Rumsfeld's 2001 (but pre-9/11) context, he was addressing a late 1990s' Pentagon planning concept for waging "two major regional wars."

Rumsfeld wanted to align Pentagon strategy with budget if not strategic threat. Since 1993 Congress had been spending the so-called end of the Cold War "peace dividend."

As for reality? In 1993 Russia was kaput. In 1993 it appeared China wanted to make money.In 2022 China is "the pacing threat." That's Pentagonese for America's most potent enemy. In his pre-testimony written remarks, Gilday employed the slang to make his point: "Sea control and power projection are essential to U.S. national security and long-term economic health." China, "our pacing threat, clearly recognizes this..."

In 2018, Congress stipulated the Navy deploy a 355-ship fleet "as soon as practicable," but the fleet has been reduced due to budget requirements. China's fleet already has 355 ships.

Lose the big one, what matters the hold?