Austin Bay
|
Posted: Oct 09, 2019 12:01 AM
Share   Tweet
The opinions expressed by columnists are their own and do not necessarily represent the views of Townhall.com. 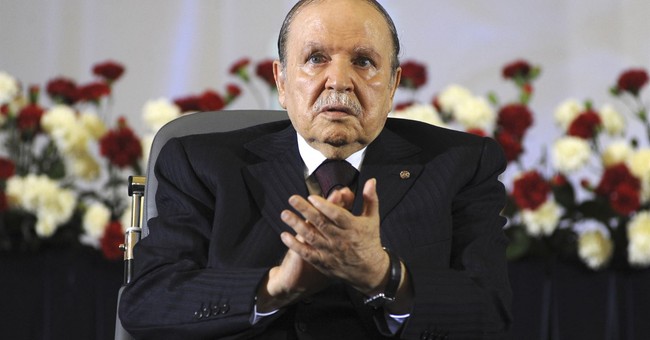 By mid-March, even the FNL's hardened, corrupt old guard realized "the Friday protests" opposing Bouteflika and his clique had become a careful but powerful mass insurrection.

On April 2, the Friday protests, protests on other weekdays and a general strike forced Bouteflika to resign the presidency. He was said to be receiving treatment in a Swiss hospital. The acting prime minister appointed an interim government whose president would hold office until July.

But the protests didn't end. Oct. 4 marked 33 straight Fridays with anti-government demonstrations in Algeria's major cities and towns. Though observers report the number of protestors has begun to dwindle, everyone expects demonstrations will occur Oct. 11 and continue at least until the Dec. 12 presidential election. And yes, the interim government remains in power, though it lacks constitutional authority.

The comparative restraint exhibited by both demonstrators and government forces, and the lack -- so far -- of deadly violence (some injuries have occurred), may explain why Algerian Spring 2019 rates cursory in international media coverage. French media are the exception; they have noticed both the stakes and the restraint. The French magazine Le Point dubbed Algeria's revolt "the smile revolution." Algerian military leaders know shooting protestors risks igniting civil war.

The "if it bleeds, it leads" news media are missing a consequential social and political event that is Algeria's most serious and genuine civil rebellion since the 1950s and '60s when France tried to suppress Algeria's independence movement (which, ironically, was led by the FNL).

Algeria 2019 does run the risk of renewed civil war, but it also has the potential to bring meaningful change to its citizenry that is well-educated, informed and tech-savvy, and sick of insider corruption, police brutality and judicial malfeasance.

Tech-savvyness spurred the Feb. 22 nationwide protests. The first big anti-Bouteflika protest occurred Feb. 16 in a single town. Internet access, social media and phone calls spread the news and then catalyzed and linked the Feb. 22 protests, the capital, Algiers, being the key venue.

Between 2 and 3 million people participated in the March 1 protests. Algeria has 43 million people, so roughly 5 to 6% of the country took to the streets.

French and Algerian media report the majority of demonstrators are overwhelmingly young people in their late teens, 20s or early 30s -- Algerians who want a future. The age demographic is one reason army generals believe most of the soldiers and junior officers side with the demonstrators.

But the young don't think they have a future with FNL crooks in charge. Seventy percent of Algeria's unemployed are young men and women in their late teens and 20s -- and they demand jobs. The overall unemployment rate is supposedly 15%, though activists contend the figure is higher.

The unemployed young blame the FNL government for the corruption and mismanagement that wastes Algeria's oil wealth and stifles entrepreneurial freedom.

The demonstrators oppose what the FNL once called "managed democracy." Democracy it isn't. The FNL controls mass media and restricts (sometime eliminates) opposition political activity. When it could no longer ignore the careful rebels, the government media began smearing them insistently. But 20-somethings with cellphones easily access Western media. Many speak some French.

The interim government continues to resist three key protester demands: a free and fair election, time to organize political parties without FNL interference, and economic reforms implemented to revive the economy while the country still has foreign currency reserves.

How long it can continue to resist without inciting violent revolution, particularly if it undermines the December election, remains to be seen.

Sudan's 2019 revolutionaries and Hong Kong's protesters articulate goals akin to those of the young Algerians. All three movements despise dictatorships and, on their own terms, seek to establish a Western-style civil society with an elected government operating under the rule of law. Alas, Marxist professors and multicultural academics will utterly fail to understand.