Austin Bay
|
Posted: Dec 05, 2018 12:01 AM
Share   Tweet
The opinions expressed by columnists are their own and do not necessarily represent the views of Townhall.com. 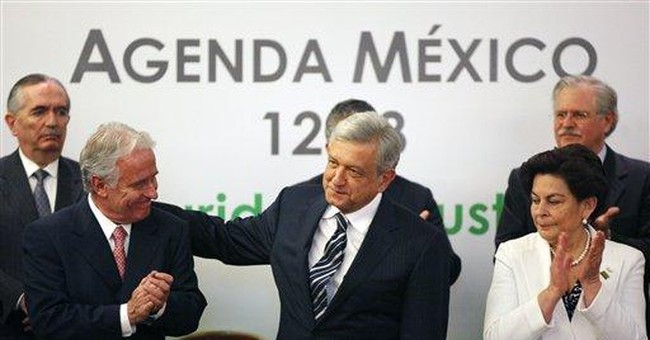 Mexico's problems are numerous. Some are merely frustrating, requiring patient bureaucratic workarounds that savvy Mexican citizens have polished as a skill set. Others, however, are morally, economically and institutionally draining, alienating the decent and driving the poor deeper into poverty.

The worst of Mexico's problems are hideously deadly. Just look at the cartel war death toll -- a toll which continues to mount as drug lords launder billions of dollars while bribed police, judicial and political cronies protect them. According to official figures, in Mexico during 2017, 29,168 people were murdered. The 2018 figure may be higher.

However, Lopez Obrador has an opportunity to confront and alter for the better an intractable problem that will institutionally and morally benefit Mexico. Ultimately, the rest of North America will also benefit if he succeeds.

Understanding the opportunity requires some psychological and historical context. Lopez Obrador has been a political character in Mexico long enough to acquire a relatively rare achievement for a politician -- his own internationally recognized initialism. FDR is another example. However, the comparison between FDR and AMLO begins and ends with the fact they are recognized with their initials.

FDR had a knack for selecting superb lieutenants. He also oversaw the U.S. victory in WWII. AMLO has a knack for whining about his presidential election loss in 2006. That said, in July 2018 AMLO won an overwhelming electoral victory that fraud could not mar. While whining, he also established his own political party (MORENA), which broke with the Mexican left and center-left. That took guts.

The political realignment and his victory demonstrate resilience and the ability to adapt.

Alas, we consider the uncomfortable psychological dimension. During his years in Mexico's political business (yes, political business), AMLO acquired a deserved reputation for eccentricity. In North American media speak "eccentricity" may serve as a euphemism for uniqueness, creativity, bizarreness, unpredictable comments before television cameras, or frighteningly consequential vacillation when confronting a decision.

Unfortunately, all of these media interpretations apply to the now-president.

Let's add some historical context. For decades, President AMLO, as a self-proclaimed man of the political left, has promised radical change and new prosperity in Mexico. Why will this happen? Because... because national socialism... no, because... because AMLO!

Failed socialist experiments have heard that cant. The list of failed socialist and "fuhrer" experiments is long and tragic. Stalinist Russia and Hitler's Reich are on it. Contemporary Venezuela is on it. So is Zimbabwe. This is a list any sensible leader wants to avoid.

Let's address where he won't change. During the campaign, AMLO said he would demilitarize the cartel war. However, in November 2018 he said that the Mexican military would continue to bear the burden of the war on powerful criminal organizations. He is following the same rhetorical path plowed by his "peacenik" presidential predecessor Enrique Pena Nieto, who wanted to substitute a gendarmerie for the military in anti-cartel operations. Pena didn't do it. Last month, AMLO floated a plan that would create a national guard composed of military and police forces but under military command.

He also made the eccentric statement that he didn't know how "hopelessly corrupt" Mexican civilian police forces are. Malarkey? I think so.

However, on inauguration day, AMLO invoked a word that transfixes Mexico: impunity. Under his administration "Corruption and impunity" will end he said. If it does, AMLO will transform Mexico.

For angry and disenchanted Mexican citizens, "impunity" means embedded injustice within their nation's governing institutions and society. When shouted by protestors, it expresses deep disgust with political and economic leaders who cannot -- or worse, will not -- combat it.

Impunity directly connects to the Iguala mass kidnappings of September 2014, when 43 students from the Ayotzinapa Rural Teachers' College in Guerrero state were murdered. International investigators concluded the Pena government's investigation was seriously flawed.

AMLO promised to establish a truth commission to answer the questions that the Pena administration failed to answer. Two days after his inauguration, he posed for a photo with the parents of the missing students.

With that photo, AMLO put his legacy on the line.