Russia's War in Ukraine and War Games in Belarus

Austin Bay
|
Posted: Sep 20, 2017 12:01 AM
Share   Tweet
The opinions expressed by columnists are their own and do not necessarily represent the views of Townhall.com. 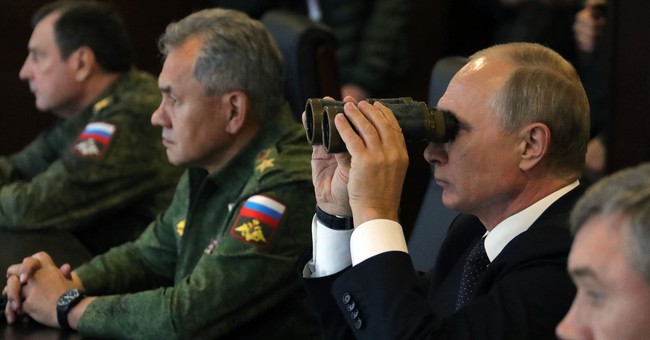 A minor dispute rages over the precise translation of Putin's April 25, 2005, USSR lamentation. Did he say that the USSR's demise was "a major geopolitical disaster of the (20th) century" or that it was the "greatest geopolitical catastrophe of the century"?

The BBC and NBC News chose the "catastrophe" translation. Both renditions confirm the USSR's collapse appalled the former KGB colonel, who is now Russia's president.

Putin's dismay says a lot about him. The USSR was a Russian empire with Communist trappings. The czars portrayed themselves as defenders of Orthodox Christianity. The Communist dictators claimed they were the vanguard of global Marxism defending Workers' Paradise. Both regimes relied on gulags, secret police and state terror to maintain power.

Both appealed to Russian ethnic solidarity and nationalist aspirations. In WW2, when invading Nazi armies threatened his regime, Communist dictator Josef Stalin called on the people to defend Mother Russia, not communism.

Putin bewails the lot of Russians living in non-Russian, former Soviet territories. Putin repeatedly claims he must act to protect "cut off" Russians or secure "Russian rights" in these regions. The Kremlin invoked these justifications in 2008 during the Russo-Georgia War. They also provided propaganda cover for the 2014 invasion of Crimea and eastern Ukraine. Protecting ethnic Russians justifies Kremlin support for the rogue Transnistria statelet, a Russified sliver of Moldova. In different disguises (including peacekeeping contingents), the Kremlin has kept a Russian military force in Transnistria since 1992.

In early 2014, Russian agitators orchestrated incidents to "prove" the fiction that violent "Ukrainian fascists" threatened Russians living in Crimea. Such a dire situation! The Kremlin had to take all means necessary to protect ethnic Russians. The Kremlin made the same claim when its proxy forces invaded eastern Ukraine. It continues to use the propaganda trope.

The Crimean annexation and the war with Ukraine are evidence Putin intends to rebuild the USSR, or at least control key parts that would make Greater Russia a global power.

RUBK -- pronounced "rubik" as in in the puzzle Rubik's Cube -- is an acronym for Russia, Ukraine, Belarus and Kazakhstan. Under Kremlin control, the RUBK would have the demographics and natural resources to once again make Greater Russia a global power.

Super-power status takes money and a large number of people (how large is arguable, but 200 million is a plausible figure).

Russia already wields immense political and economic influence in Kazakhstan; the country is essentially a Kremlin satrap. At the moment Belarus escapes complete Kremlin control. However, several analysts claim the huge on-going war game in Belarus could easily mask an invasion of the country. What does Belarus do if the Russian Army just decides to stay?

Perhaps the Kremlin intends to forward deploy Russian tank divisions in Belarus. Belarus is a route to Kaliningrad, the Russian exclave on the Baltic. The Kremlin wants to "re-connect" Kaliningrad. However, Lithuania and a sliver of Polish territory known as the Suwalki Gap separate Belarus from Kaliningrad. Russians in Kaliningrad are definitely "cut off."

Polish Army units defend the gap. Remember, Poland is a NATO nation, an armed member of that great Western coalition.