Austin Bay
|
Posted: Sep 13, 2017 12:01 AM
Share   Tweet
The opinions expressed by columnists are their own and do not necessarily represent the views of Townhall.com. 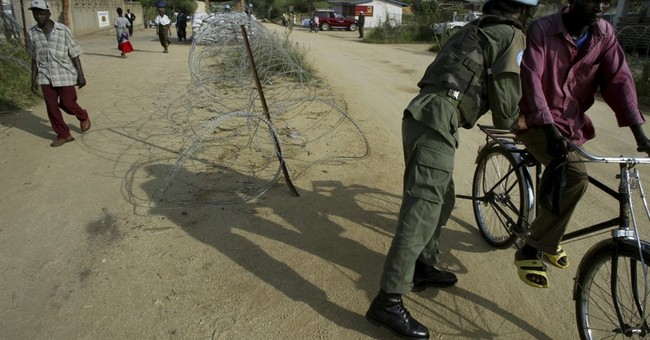 In August 2016, small but violent conflict erupted in the Democratic Republic of Congo's south-central Kasai region.

In the world beyond the Kasai region's five provinces (Kasai, Kasai-Central, Kasai-Oriental, Sankuru and Lomami) the cause of the violent outburst was unclear. According to initial reports, it involved a local grievance.

The Kasai region's relative isolation contributed to the lack of information. However, President Joseph Kabila's government wanted to limit news coverage. A self-serving decision made by his regime and related to the upcoming November 2016 national election was the "local grievance" that deeply offended hundreds of thousands of citizens within the region. Members of the dominant Luba tribe scorned Kabila's decision as an arrogant cultural insult and an outright political crime.

A year later, the once opaque clash has spread and expanded. Officials with the UN's Congo peacekeeping operation are calling the chaos in Kasai Congo's and central Africa's most dangerous conflict.

Death toll estimates range from 3,000 to 6,000, but investigators discover new mass graves with mutilated bodies on a daily basis. Compared to Syria, the death toll is low. But Kasai has been a war of massacres, by the government and the rebels. Kabila's forces burn villages and those attacks create refugees. Now the numbers boggle. The UN High Commissioner for Refugees estimates that Kasai's violence has displaced about 1.5 million people. Over 30,000 refugees have fled across the border to Angola.

Trouble began when a man named Jean-Prince Mpandi came to Kasai to claim the title of Kamuina Nsapu, the traditional (customary) chief of a local Luba clan. Mpandi was a critic of Kabila. The Kabila government denied him the office and appointed a Kabila supporter to the position. Mpandi objected to government interference in tribal affairs and called on local citizens to resist.

In August 2016, government forces killed him -- and the war was on. The rebel militia adopted the name Kamuina Nsapu and accused Kabila of seeking "unjust political domination".

In fall 2016, the Kamuina Nsapu was essentially a tribe-based militia. As the conflict spread, it has taken on the characteristics of a broader based anti-government movement whose rebellion has an anti-Kabila dimension -- and that element could nationalize the rebellion and reignite the Great Congo War.

The "unjust political domination" accusation resonates with other political and ethnic groups in Congo who oppose Kabila. Remember the November 2016 election to choose Kabila's successor?

The Kabila regime delayed preparations, and then finally canceled. His second term ended in December 2016, but he refused to vacate the office, making the absurd argument that his second term was really his first term

Congo's constitution limits presidents to two terms. Agreeing to limit terms went a long way to ending the Great Congo War. The limitation agreement was reached in December 2002. Kabila not only violated the law, he broke the peace agreement.

Despite signing an agreement to cede power and hold elections in 2017 (the December Accord), Kabila remains in office.

Some observers argue the Kasai insurgency illustrates what could happen throughout the country if Kabila continues to illegally remain in office. Yes, another brutal civil war.

Kabila maintains power because he controls the security forces and the government's patronage system. His presidential guard unit is the most powerful military unit in the country -- with the major exception of the UN's MONUSCO peacekeeping force.

To the delight of UN officials in Congo, western donor nations and Congo's political opposition, Angola is encouraging other African states to oppose Kabila.

For Kabila and his regime, the local grievance in Kasai has become an international problem.

Share this on Facebook
Tweet
So, We're Just Going to Ignore a Bunch of Green Warriors Who Tried to Storm the Department of the Interior?
Matt Vespa
Marine Who Criticized Disastrous Afghanistan Exit Has Been Handed His Sentence
Leah Barkoukis