Austin Bay
|
Posted: Sep 06, 2017 12:01 AM
Share   Tweet
The opinions expressed by columnists are their own and do not necessarily represent the views of Townhall.com. 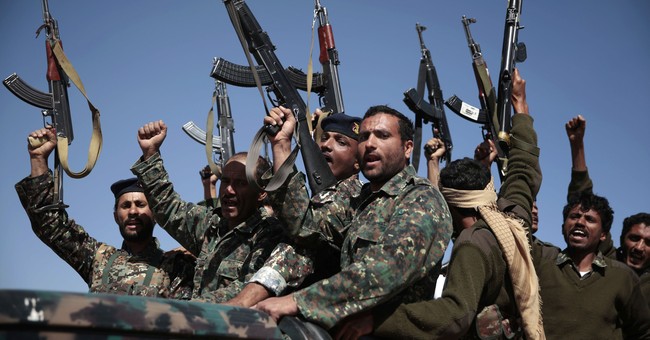 In comparison, Yemen's civil war on the Arabian Peninsula's southwestern corner receives little notice. There are many reasons. Though regional powers Iran and Saudi Arabia back the two major antagonists, it is difficult to determine what the warring factions really want. Both are coalitions mixing rebelling soldiers, angry tribes and strong men with selfish motives. Al-Qaida on the Arabian Peninsula is also a force in Yemen.

However, what aid organizations call "the deadly combination" of war, disease and mass starvation has suddenly brought global attention to Yemen's ugly conflict.

Earlier this year, the UN announced Yemen would soon be the world's biggest humanitarian crisis, supplanting South Sudan and Syria in terms of lives at risk.

Yemen has a population of 27 million people. 18 million need some type of assistance in order to survive.

Epidemic disease threatens the country. According to the World Health Organization, since April, over 610,000 Yemenis have contracted cholera. Combat has damaged -- and in some cases destroyed -- water and sanitation systems in urban areas. Dirty water is cholera's breeding ground. The rainy season rainwater flooded damaged sanitation systems and spread contamination.

Yemen lacks food. UN personnel in Yemen classify 6.8 million Yemenis as "food insecure," which means they lack access to sufficient food and need supplemental aid to maintain their health. Some reports indicate that half of the 6.8 million face starvation. One million people suffer from severe acute malnutrition -- which means they don't face starvation, they are starving.

Yemen was once self-sufficient in the production of cereal crops. Bad government and inadequate infrastructure reduced agricultural output. War has reduced it further. Yemen must rely on imports and aid for 75 to 80 percent of its food. Food shortages played a role in the 2011 revolt against the government.

Fighting has displaced over three million Yemenis and that figure may be low given the fighting in Summer 2017. Many of the displaced are in areas isolated by combat. They lack shelter. Lack of shelter leads to death from exposure, particularly among children and the elderly.

The war is the responsibility of many people and factions. Former president Ali Abdullah Saleh mismanaged the country. Saleh was toppled in 2011 by the Houthis, who are Shia Muslim backed by Shia Iran. Saleh (a Sunni Muslim) is now an ally of the Houthis, though that alliance is troubled. Two weeks ago there were rumors Houthi leaders had placed him under arrest in the capital, Sana'a. The Houthis control Sana'a and northwestern Yemen.

Iran uses Yemen as a proxy battlefield to attack its chief regional rival, Sunni Muslim Saudi Arabia. The Iranians say Yemen is Saudi Arabia's "back door." Iran has supplied its proxies with weapons, ammunition and money. Credible defense sources report Iran has deployed Iranian and Lebanese-Hezbollah advisers and technical experts in Houthi-controlled areas. An estimated 50 advisers have been killed or captured.

Saudi Arabia disputes the accusation and says in Yemen it is defending itself from Iran. However, several Saudi citizens and organizations have contributed millions of dollars to provide food and medical relief in Yemen.

As for the war and the suffering? There is no end in sight.