The Struggle for Turkey's Soul 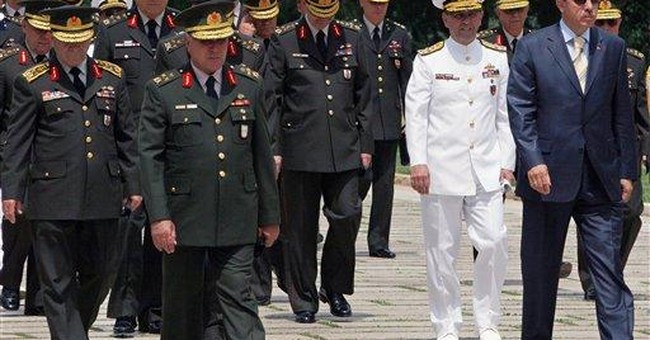 The government, led by the "moderate Islamist" Justice and Development Party (AKP), has cause for concern. The Turkish military has toppled elected governments four times since 1960. The European Union has made continued civilian rule a key requirement for Turkey's admission to the EU.

Though the alleged coup was planned in 2003, the current situation is quite serious. The Turkish press reports that Turkish Prime Minister Recep Tayyip Erdogan and Turkish Army Chief of Staff Gen. Ilker Basbug have held intense discussions where they have addressed the arrests and the evidence.

This domestic Turkish confrontation involves much more than a classic "military junta versus civilian rule" media template, however. Turkish law tasks the Turkish military with defending Turkey's secular state and the secular reforms of Kemal Ataturk, the founder of the Republic of Turkey. The spring 2010 crisis in Ankara reflects what historians have dubbed "the struggle for Turkey's soul" and a long-term battle for the terms of modernity.

Turkey's journey since the collapse of the Ottoman Empire in 1918 has been remarkable. By the mid?1920s, after a bloody war with Greece (in Anatolia, Thrace and Ionia) and an extended military and political confrontation with French, British and Italian occupiers, nationalist forces led by Ataturk regained control of the Turkish heartland. The "Kemalist" Republic, using the armed forces as a source of stability, focused on internal Turkish development -- and the once "Sick Man of Europe" became the Quiet Man of Europe.

Under Ataturk, the Ottoman's Islamic superpower of four and a half centuries embarked on a mission into "modernity" -- a secular government, Latin written script, women's rights, public education and a careful program of industrial modernization. A cornerstone of the Turkish Republic was "non-recidivism": Turkey made no claims on lost territory.

As the 21st century begins, Turkey has emerged as a regional super-power of military, social, political and economic import. It maintains the second-largest army directly committed to NATO.

Turkey, however, remains in the middle of a hot political crucible. Iran is a neighbor and a major competitor. Turkey also faces other troubles: a bleeding Kurdish insurgency in its southeastern provinces that extends into Iraqi Kurdistan; conflict with Greece, over Cyprus and the Aegean; resentment in the Balkans; lingering claims of Ottoman-directed genocide by Armenians; and hard-left radical terrorists (a Cold War hangover).

Turkey's membership negotiations with the EU often sound more like divorce proceedings than marriage arrangements, but today's tough rhetoric bests the war-littered past. For eight centuries, Turks and Europeans battled in the Balkans and Mediterranean.

Yet Turkey has spent the last eight decades edging toward Europe, politically, economically and culturally. Kemalists (Turks who favor strong secular, nationalist institutions) believe Turkey is the "bridge nation" demonstrating the path to genuine modernization for other predominantly Muslim nations.

Then in 2002 the AKP, a party with Islamist roots, came to power. There were reasons. Corruption and cronyism ripped the secular parties. Some secularist politicians had played their own versions of "the Muslim card" (appeals to conservative Muslim sectarian sympathies).

The AKP challenges the Kemalist model. The Kemalists reject the "re-Islamization" of Turkey and see the AKP-led governments as the slippery slope to Muslim fundamentalist control (referred to as "religious reaction").

In his book "The Kemalists," Turkish journalist Muammer Kaylan (former editor of the influential newspaper Hurriyet and a Reuters reporter) illustrates how the AKP uses EU membership requirements to strengthen its position. Reforms required for EU membership are "the Islamists dream ... come true to expand their powerbase. The generals, however, regarded some of the (EU) reforms ... as potential weapons to subvert the state. They feared that these reforms could change the state's ideology based on the Kemalist reforms and weaken their role as the guardians against separatist and fundamentalist movements."