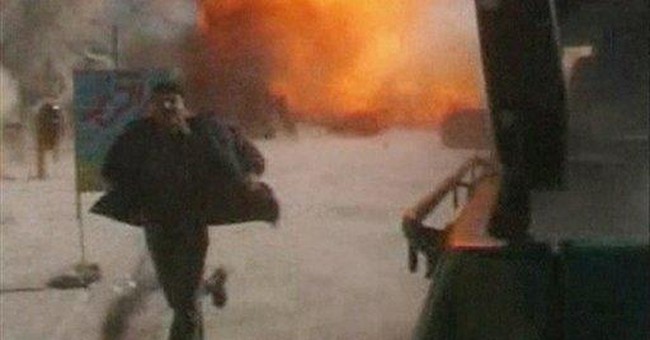 The game hit the Internet on July 25, 2007. With a title reminiscent of a Bruce Lee epic or -- a much more dangerous allusion for Beijing bureaucrats schooled in tumultuous history -- an echo of "Outlaws of the Marsh" (tales of 12th century Chinese Robin Hoods), "Incorruptible Fighter" riveted Chinese cyber-audiences who had an angry yen (or a yuan) for tarring, feathering and then executing corrupt government officials.

Yes, winning the game entailed eliminating government crooks. China Daily described the game as "the story of a man who fights corrupt officials and purifies himself by improving morality and ethics. After weathering various hardships and weeding out the bad guys, he finally gets to embrace a corruption-free world in which people live peacefully."

China Daily credited government workers in the city of Ningbo (Zhejiang Province, eastern China) with creating the game. A commenter at StrategyPage.com (writing on Aug. 20, 2007) said this was true and provided additional details: Besides nailing crooked leaders, players could get even with the leaders' kids "and their bikini-clad mistresses."

Recipe for a blockbuster. The game had sex, mayhem and graphic revenge extracted from arrogant, thieving officials protected by a Kafka-esque system they controlled.

Alas, the game itself had no happily ever after. "Incorruptible Fighter" disappeared from the Internet on Aug. 5, 2007. Who shut it down? That was never quite clear, but Internet commenters argued it scorched "exposed nerves."

Indeed it did. Real world corruption threatens China's government and economy, and its stability. Chinese President Hu Jintao said in October 2007, "Resolutely punishing and effectively preventing corruption bears on the popular support for the party and on its very survival." While the demise of the Communist Party (which has corrupt and reformist factions) would ultimately benefit China, a Chinese civil war featuring nuclear-armed regional warlords is a geo-strategic nightmare.

Corruption -- from petty graft by the county commissioner to the mega-theft of billions by tyrants -- is a global affliction. Corruption coupled with systemic lack of accountability produces more than cynicism and anger. In the developing world, it steals the future, condemning millions to poverty.

Corruption -- which reaches to the highest levels -- stains the mullahs' dictatorship in Iran. The Grand Ayatollah Ruhollah Khomeini and his cohort came to power in 1979 promising to end the Shah's authoritarian rule and family tradition of nepotism and theft. Khomeini died, and his heirs "two upped" the Shah by creating both a more despotic and more venally corrupt junta. Disgust with the mullahs' theft fuels opposition to the "Islamic Revolutionary" regime and empowers Iran's Green Revolution.

Developmental aid advocates don't like to say it in public because government officials in developing countries will withhold visas or harass their local staffers, but corruption by local, state and tribal elites undermines relief efforts and economic development programs.

Government officials and corporate presidents in wealthy nations can also be bribed. Saddam Hussein's corruption of the U.N. Oil For Food program is an example of an international bribery scam. From the mid-1990s until the 2003 invasion, Saddam bought political support by slipping millions to dozens of organizations and individuals.

The U.S. has made counter-corruption programs a key element in the War on Terror. Corruption feeds crime and discontent, and terrorists leverage both to buy weapons, gain safe haven, make money and attract recruits. Egyptian corruption is one of the Muslim Brotherhood's chief recruiting tools. Afghanistan's Taliban is in the narcotics business, but so are rogues in the Afghan government. Pakistan acknowledges it has a corruption problem, one that undermines its credibility with the economically productive middle classes.

China's Outlaws of the Marsh opposed the Song Dynasty, but historians describe the tale as "a call to oppose all corrupt governments." The fight continues.