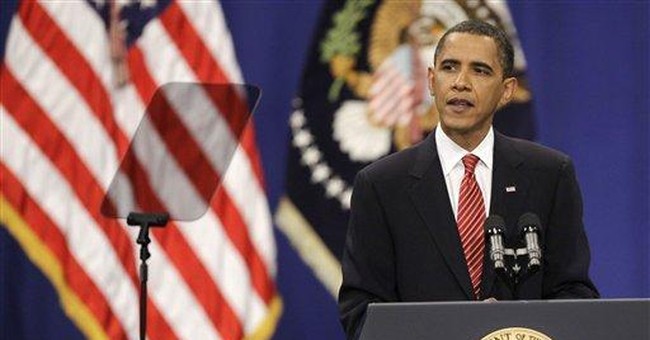 President Barack Obama's "new" approach to Afghanistan is a surge in sheep's clothing.

Robert Gibbs' woolly explanation prior to Obama's speech is illustrative: "What the president will announce is an acceleration of our targeting of al-Qaida and its allies."

The president's speech continued that triangulation, adding benchmarks for Afghan security forces and cautioning that America's commitment is not open-ended. Essentially, Obama gave the Afghanis (and the Taliban) a time line, "by the end of 2011," the president said, or (implied) America leaves.

Warning to President Obama. War rarely conforms to a politician's druthers, and insurgencies never do -- even when defeated insurgencies fade, with violent codas.

The battlefield bottom line remains U.S. Afghanistan commander Lt. Gen. Stanley McChrystal will receive a solid chunk of the additional troops he asked for months ago. The Obama administration believes it has secured increased troop commitment from allies. If these contingents appear on the battlefield, well-equipped and deployed with rules of engagement that allow them to take offensive combat action against the Taliban, then the administration will deserve a kudo.

Will the fight against al-Qaida accelerate, as advertised?

Pakistan's current counter-Taliban offensive provides an extraordinary opportunity, politically and militarily. The November 2008 Mumbai attack by Islamist terrorists exposed Pakistan's smoldering civil war. After Mumbai, India presented Pakistani modernists with a choice: end the threat posed by your fanatics, or we will end it, on our terms. This fall, the Pakistani Army has taken the war deep into Pakistani Taliban sanctuaries. This potentially places the Pakistani and Afghani wings of the Taliban between two grindstones -- Pakistan's army to the south, NATO to the north.

Did McChrystal see this coming? I think it likely, since CENTCOM has been pushing for similar offensive action at least since 2002. If Obama had complied when McChrystal requested reinforcements, NATO would be at least a couple of brigades stronger. But Obama delayed his surge.

The Iraq surge provided more troops at a critical time, but a time that was politically opportune. Prime Minister Nouri al-Maliki's new democratic government (only formed in May 2006) was prepared to take counterinsurgent actions (e.g., isolating urban neighborhoods with concrete barriers). The grand message the Bush administration sent, however, was decisive: America will persevere and win.

President Bush didn't give a time line, he set a condition: stability that fostered Iraqi democracy and permitted Iraqi assumption of the battle. That's leadership with spine. Obama has, at least rhetorically, warmed to Iraq's emerging success, and briefly lauded it in his speech, though in his triangulation mode he seeks to segregate Afghanistan from Iraq. It is a compartmentalization that serves Democratic Party politics, just like re-naming the Global War on Terror an "overseas contingency" has "triangulatory" purposes.

The fact is al-Qaida has been in the crosshairs since Sept. 12, 2001. Would that we had begun targeting al-Qaida after its attacks on the World Trade Center in 1993 and our East African embassies in 1998. We didn't. Our actions in what the Clinton administration framed as discrete theaters in fact encouraged al-Qaida's millenarian fanatics.

The Clinton administration's decision to withdraw from Somalia after 1993's Blackhawk Down fiasco is an example of the self-destructive falsehood of that narrow scope. Al-Qaida reached the conclusion that the United States lacked staying power, the will to persevere.

The "Third Letter to the Africa Corps" (a collection of letters, actually, translated in June 2002) substantiates this point. Somalia is judged a "splendid victory" with "profound implications ideologically, politically and psychologically." One letter adds: "The Somali experience confirmed the spurious nature of American power and that it has not recovered from the Vietnam complex. It fears getting bogged down in a real war that would reveal its psychological collapse at the level of personnel and leader(ship)."

This is why McChrystal got his troops. This is also why a condition, not a time line, must guide American military engagement in Afghanistan.