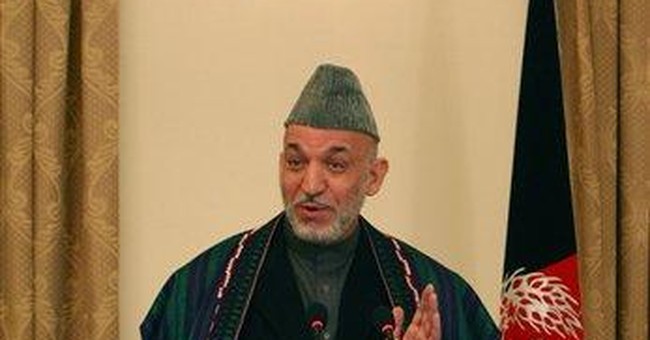 The war in Afghanistan now vexes Barack Obama and his administration.

It is a tough struggle, a Himalayan slog, but one President Obama himself claims is a "must win."

The problems afflicting Afghanistan and its violent neighborhood are maliciously complex -- "wicked" problems to use a catchphrase.

"Wicked" problems are dynamic and multidimensional -- intricate, constantly changing challenges that frustrate precise definition. As a wicked problem evolves, we can learn a lot about it -- useful knowledge informing constructive action. But the problem will still change in unforeseen and unexpected ways, seeding "unknown unknowns" that produce surprise. In a wicked problem like a war, surprise may be fatal.

A strategic planner I know says all problems involving human psychology have "wicked" elements. Here's the gist of a complex argument: as basic needs (food and shelter) are met, new needs (pension plans) arise. To paraphrase the Rolling Stones, we "can't get no permanent satisfaction."

Even semi-satisfaction would please most Afghanis. Since fall 2001, Afghanis have seen some incremental improvements, positive changes from the point of view of everyone but terrorist fanatics. The Afghan government has had some success in beginning to build formal institutions. The Afghan Army can handle some basic security missions, and it is improving, albeit slowly.

Slow is an Afghan affliction. Yet fundamental change takes a long time, especially when a war-ravaged society must expand the "human capital" of modernity -- produce the teachers, accountants, electricians, nurses, policemen and farmers who brace stable, prosperous communities.

Slow may be fatal when you rely on the American public's will. That is reflected by the ongoing struggle over Afghan policy within the Obama administration and Democratic leaders on Capitol Hill.

Obama appears to be committed to winning. During his campaign, Obama identified Afghanistan as "the right war." He is looking for diplomatic opportunities. He intends to send more U.S. troops and -- like George W. Bush before him -- demands more combat forces from NATO allies.

This is why some seek military operational changes that will promote economic development and political stability. The term "surge" gets used, though in hushed tones, for a number of Democrats deplored Bush's Iraqi "surge" and guaranteed it wouldn't work. Eliminating terrorist base areas in Pakistan is viewed as a potential "game changer."

During the campaign, Obama advocated an offensive strike at al-Qaida and Taliban enclaves inside Pakistan -- with or without Pakistan's permission. Cooler heads suggested such boldness (particularly if executed without Pakistani cooperation) would politically damage Pakistan's fragile central government and perhaps destroy it. Collapse in Islamabad would seed chaos from Kashmir to Baluchistan -- a "wicked" game changer.

The Pakistanis may eventually decide it is in their national interest, and in the interest of regional stability, to destroy al-Qaida's sanctuaries. The radicals threaten Pakistan, and more Pakistanis know it, which improves America's chances for a "diplomatic" elimination of the bases. The Mumbai, India, massacre by Islamist terrorists brought Pakistan to the brink of war with India -- a nuclear war. The Islamist takeover of Pakistan's Swat Valley and the subsequent destruction of the area seem to have backfired politically -- 11th century tribal values don't promote economic growth.

Eliminating the enclaves will definitely help -- but that does not "solve" Afghanistan.

Other options stalking Capitol Hill include leaving Afghanistan after crafting a "deal" that denies the use of its territory to terrorists who wish to attack the United States. Conceivably, this "surviving guarantor" might not be the current central government but could be a vast tribal confederation that includes the Taliban.

How does this come about? The "Sunni Awakening" in Iraq "delinked" Sunni Arab tribes from al-Qaida. The "Pushtun" Taliban have tribal interests "Arab" (foreign) al-Qaida ideologues don't share. "Delinking" the Taliban and al-Qaida would be a huge political victory, but what keeps a Taliban government from reneging once the United States withdraws?

The Bush administration came to Washington highly suspicious of "nation-building" but left convinced America was in a long war for the terms of modernity. Nation-building was a difficult, "wicked" choice -- slow, tedious, incremental and dirty -- but the best choice for the long term if you really want change.

Another Fauci Lie About Masks and the COVID Vaccine Comes Back to Bite Him
Townhall
Tweeter asks for reasons why any civilian 'needs' a semi-automatic rifle with all the attachments (except for a chainsaw bayonet)
Twitchy
Randi Weingarten Shoots Herself and the Biden Admin in the Foot With a Huge Admission
Redstate
Insanity Wrap #209: White People Even Walk Racist
PJ Media