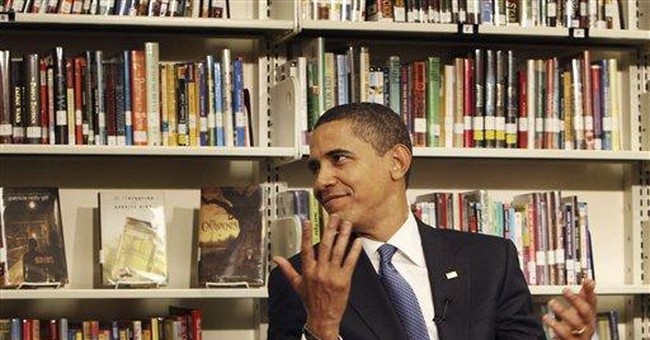 How praiseworthy, BBC, I muttered -- a restrained headline touting the relative absence of violence.

And a decent job of planning and execution, Iraqi Army, I thought as I scanned the BBC's report. The scan elicited a string of memories. Civilians anywhere are always easy targets -- that's why al-Qaida, Saddam's Baathist holdouts, and the gangs we call the Mahdi Army and "special groups" still target Iraqi civilians. It's why Pakistani terrorists struck Mumbai -- the Indian Army is a hard target, a Mumbai street vendor isn't.

But voters traipsing to the polls offer terrorists particularly easy targets ripe for mass murder, which in turn generates the sensational headlines terrorists seek. Protecting civilians on sidewalks entering and exiting easily accessible locations (i.e., polling places) was one of the biggest problems confronting U.S., coalition and Iraqi forces during 2004 as they prepared for Iraq's historic January 2005 elections.

I know from personal experience -- the plans team I served with in Iraq struggled with this complex problem. The courage of the Iraqi people won that election, as ink-stained fingers became the symbol of democratic will in the face of personal danger.

The election, however, is much more than a significant headline and a solid security operation. The election demonstrates rather dramatically that Iraq's process of political maturation continues. Remember, the first post-Saddam vote took place only four years ago, and Prime Minister Nouri al-Maliki's government formed in May 2006. In this election, voters punished several sectarian parties, tossing the rascals out because they hadn't performed. In several provinces, Iraqi secular political parties did much better, which is a sharp blow to extremist Shias and their Iranian financiers.

The election is also an implicit rebuke -- delivered by the Iraqi people -- of posturing defeatists like Senate Majority Leader Harry Reid, who declared Iraq a lost war and a hopeless cause. Perhaps the commentators who claim Arabs can't handle democracy will reconsider their position.

In the next week or so, I hope to read this headline: "Sen. Reid, we didn't lose. And there is hope in Iraq, President Obama, because there has been significant change. Now don't blow it just because you ran on a platform of retreat."

Not a headline? It ought to be.

Obama is a very lucky new president -- he has an emerging victory at hand. Securing it and reinforcing it will enhance his chances of achieving "Lincoln-esque" stature. The Iraqi people have earned their democracy. Historical accusations of "abandonment" and "self-defeat" don't burnish a presidential legacy.

Operation Charge of the Kings, launched in March 2008, showed that the Iraqi Army was able to plan and conduct large-scale combat and counter-insurgency operations. The U.S. and coalition forces, however, provided air, intelligence and logistical support.

In many respects, Charge of the Knights provided an example of what "strategic overwatch" looks like, the where U.S. air, intelligence and logistics assets aid Iraqi planned, led and manned security operations. "Strategic overwatch" is a delicate, multi-year process, "a wind-down" (force withdrawal) phase that could include a sudden "build-up" (reinforcement). "Strategic overwatch" is complicated -- it requires diplomacy, economic and political engagement, and steadying leadership.

Terror campaigns and insurgencies end with diminishing codas of violence. Peace and quiet -- prevalent during this past election -- instantly disappear when a terrorist tosses a grenade. The Iraqi government has improved markedly in its ability to handle internal violence, but troublemaking by neighbors like Syria and Iran remain a huge threat.

In Fargo, N.D., early last July, Obama began a "war flip-flop" by suggesting he might "refine" his Iraq policy. He needs to start refining right now -- and assure the Iraqis they will not be abandoned. The sharpest refinement would be to accept the challenges of "strategic overwatch" and help ensure a region-changing and potentially century-shaping victory.