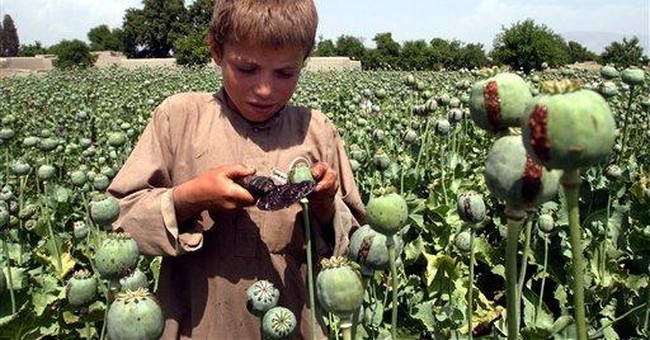 It is an example of the type of "connecting, communicating and profiting" economic and political initiative it takes to win the Global War on Terror.

What's the synergy crisis? It is a soundbite for a complex, long-term problem involving bureaucratic turf battles and lack of focused leadership that costs America lives, time and money. America has trouble synchronizing its "tools of national power" -- synergizing its diplomatic, information, military and economic power to achieve a policy goal, like winning a war.

This isn't a new affliction. Arguably, the "interagency process" that the White House uses to coordinate and synergize the Pentagon, State, Treasury, and every other department and agency hasn't worked well since the Eisenhower administration. Not only does the government fail to bring "unified" governmental power to bear, but America's private sector strengths are -- at best -- applied haphazardly, if at all.

No strategist disputes the fact America's systemic power, the global tsunami of its $14 trillion economy, the nonstop avalanche of cultural and technological creativity, gives the United States an awesome though unfocused advantage in any conflict, be it diplomatic, economic or military. It takes time, however, and the sustained application of American political will and its other "power tools" for the systemic edge to defeat an opponent. Time in war is measured in loss of lives.

I guarantee EESR isn't a magic bullet, but it is precisely the kind of experimental, inter-agency initiative that eludes rigid hierarchies and finesses turf debates by leveraging the Internet's democratic capacities for lateral communication.

The program also recognizes that the Global War on Terror is a long struggle, a fight over the terms of 21st century modernity, where winning the economic and political battles will ultimately be decisive.

"I can't tell you how many times I've spoken with people from Afghanistan and Pakistan who say to me all of this (complex war) is economics," Steve Kaplitt, director of EESR, told me. "Solve the economics, and all of this will melt away."

Neither Kaplitt nor I think it's quite that simple. But terrorist and tyrant elites certainly leverage grievances magnified by systemic poverty and corruption.

Translation: An entrepreneur in Kabul or a nurse who wants to open a clinic in Peshawar can get support, advice and financing from around the world.

"We call these business proposals instead of business plans," Kaplitt continued, "because some proposals will be straightforward for profit, some might be philanthropic. Say we have a proposal for a hospital -- that might be a hybrid (i.e., attracting private, public and philanthropic interest and support). Our key requirement is that a proposal produce sustainable private-sector jobs" in areas plagued by conflict.

Kaplitt emphasized that a proposal seeking direct U.S. government funds must meet all current funding requirements. "We're not offering or providing any kind of mechanism to have a fast track to get around those processes. We simply sort the opportunities and the entrepreneurs with potential partners."

Kaplitt added that this is a "free market approach," where the idea succeeds or fails based on market interest (in this case, investors and donors). The Internet, however, casts a wide net.

A proposal that meets basic criteria will be passed on to a team of volunteer MBA students for analysis and comment. The MBA teams work directly with the project's principal to refine the proposals. After polishing, the proposal is posted on the EESR Website and then "actively marketed" to public- and private-sector individuals or organizations who may ultimately become partners, investors, sources of advice or donors.

Kaplitt credits Dan Sullivan, the State Department's assistant secretary for economic, energy and business affairs, for pushing EESR as a concept and program. Sullivan served a tour as a Marine reserve office on the CENTCOM staff and saw the critical need for this type of local talent-developing initiative.