How the Left Seized Higher Education

Atilla Sulker
|
Posted: Jul 09, 2020 9:04 AM
Share   Tweet
The opinions expressed by columnists are their own and do not necessarily represent the views of Townhall.com. 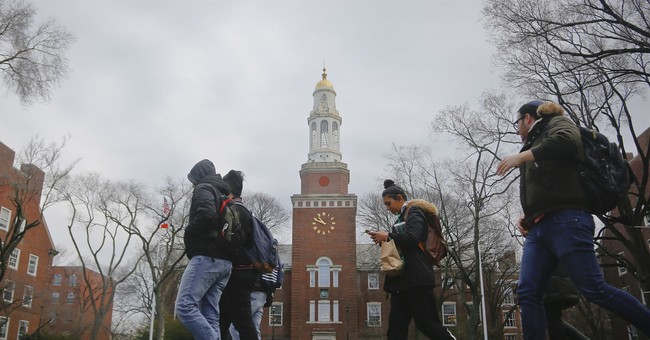 We thought it was only the humanities department that was run by leftists.

Time to think again. Before we know it, the same will be said of the math and engineering departments.

None of this should be surprising. The leftist takeover of academia is nothing new.

But how did the university debate stage fall into the hands of a concentrated and uniform consortium of individuals? The root of this problem lies in the way Americans have been conditioned to think about higher education.

Americans have fundamentally forgotten the place of the university in the societal fabric, allowing a small group of left-wing academics to take control. The Panglossian view that everybody must receive a college degree has created indifference to an integral part of higher education – the unabashed exchange of ideas.

In many ways, college is a “choose your adventure” with two main choices: 1. Become well versed in a skill that is in high demand; 2. Pursue a career in academia and make a living via debating ideas.

Nowadays, universities churn out so many students with grim employment prospects. One study found that only 55% of college graduates are in careers closely related to their field of study. The remaining 45% in mismatched careers earn less, on average.

It is reasonable to assume that the sheer number of unmotivated students in college – enrolled only due to societal pressures – is responsible for this deficit. Chances are, they’d be far better off going to trade school.

With so many people enrolled in college with little interest in academia or the attainment of complex skills such as engineering, it’s easy to see how no real opposition to the left exists.

But the epidemic of jaded students is a crisis the left would never waste. Parents would be in uproar if they saw loans going to waste. In response, leftist academics have created the illusion that they are casting otherwise mediocre students in the right direction.

Out of this illusion, a plethora of highly specialized, phony fields and courses have emerged – practically overnight. Being very loosely bound to market demand and protected by bureaucratic oversight, the ideas of these specialized academics are not only legitimized, but often forced upon students.

Harvard Professor of Government Harvey Mansfield notes: “If you look at a typical Harvard transcript, you see courses all over the place. Often on small subjects or policy questions, instead of meat and potatoes: history, economics, philosophy.” Referring to specialized gut courses, Mansfield says, “now there are a whole lot of such courses and it’s easy to waste your money on something that isn’t worth it.”

Perhaps the grossest miscalculation made by the American system was the belief that higher education is for everyone. It should be obvious that it never was. This myth was predicated on the notion that widening access to higher education would result in a net benefit on society, via extending every individual’s productive capacities.

With a little skepticism, this justification instantly crumbles.

First, why assume that every individual becomes most productive after going through college? Why couldn’t they be equally or more productive by pursuing professional certification or vocational training?

Furthermore, the “net benefit” myth assumes that all degrees are of equal value. Good luck convincing anyone in the job market that a political science degree is equally as valuable as an engineering degree. If a net productivity increase is the goal, wouldn’t it make sense for government scholarship programs to only fund degrees associated with high job demand, such as those related to STEM?

With both society and bureaucrats confused over the purpose of higher education, it’s no wonder that an advantageous group of academics has been able to enforce so much thought control. The last thing we need is to send off more unambitious students to be used as pawns by clever academics. They will never question what they are told. They will go along with it. This kind of tacit approval is the equivalent to saying “yes.”

The solution to this problem involves a serious reassessment of the role of the American university. Only then will a real battleground for ideas emerge.