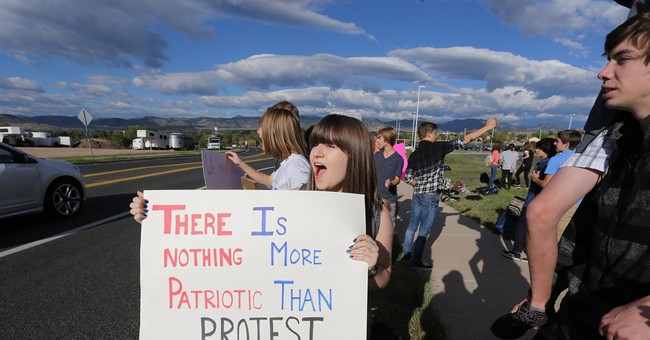 Yesterday, hundreds of high school students in the Denver area stormed out of their classrooms in protest to a proposed curriculum change from the schoolboard that would teach history in way that promotes citizenship and patriotism.

Funny to think that the idea of teaching history from a standpoint emphasizing American exceptionalism and exploring the benefits of the free-market system would somehow be controversial.

It is well known that our nation’s schools are full of liberal propaganda that seeks to indoctrinate our students. Many teachers and professors use their time in the classroom to preach their own opinions and ideology.

The sad reality is our society has bought into the political correctness movement. So much so that a proposal suggesting that history be taught in a way that depicts American exceptionalism is disturbing to students.

Students from at least five Jefferson County high schools walked out of their classes to join in protest to the proposed curriculum under the belief that somehow American history would be “censored” if this new curriculum were taught. The only “censored” history seems to be the politically correct history taught by progressives.

What leftists are quick to forget are the benefits of free-markets and capitalism, the very products that add convenience to their daily lives. How many of them own iPhones, drink Starbucks, or use many other items but yet quick to denounce free-markets.

Many colleges and universities now require students to take courses in diversity, race and ethnicity, or gender studies in order to graduate. These courses are often taught in ways that vilify America. For example, the University of Michigan requires a course in race and ethnicity that teaches that America as a nation is inherently racist. America is a country full of multiculturalism due to the fact that anyone can come here and attain citizenship—something that should be celebrated.

No one denies that our history has some dark marks, but those dark moments should not be the focus. It is important to teach the negative events in our history as well as the many positives. Larry Schweikart in his book 48 Liberal Lies About American History said, “America’s past, though not perfect, is far more admirable than you were probably taught.”

We should not be encouraging our young people to apologize for being American but rather encouraging them to take pride in their country and their heritage. It is essential that our students know about the Founding Fathers and the hardships they faced as well as the courage they demonstrated in securing our freedom as a nation.