Ferguson and the Left: Exploiting Death 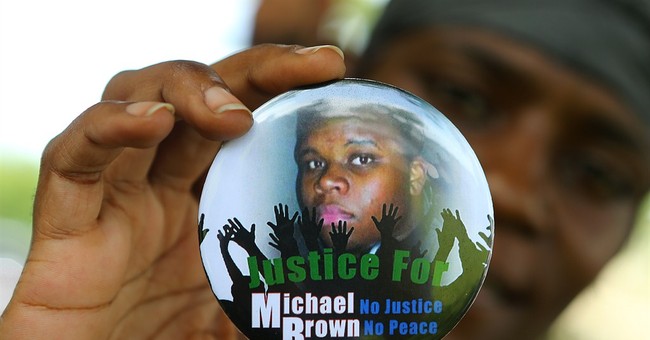 In the weeks after the shooting of Michael Brown in Ferguson, Missouri there has been a slew of discussions over the events that happened.

We have seen Rev. Al Sharpton and Rev. Jesse Jackson seizing opportunities for themselves by taking advantage of the death of Michael Brown. These two men have continuously tried to make race an issue with a generation of young people who grew up in a very different time period. It is inappropriate to use the shooting of a young man as a way to push such an agenda.

It’s not just progressive talking heads that are perpetuating the message of “institutional racism” in America. Some liberal professors have now taken to twitter to start a social media effort under “#FergusonSyllabus” which seeks to provide resources on “institutional racism” and how to discuss the events in Ferguson in the classroom.

Just last week, a teacher in Alabama had elementary school students re-enact the shooting of Michael Brown by dividing African American and Caucasian students into separate groups to teach a lesson about “white privilege” in America. This type of behavior seeks to create a racial divide that will have detrimental effects on these young students who don’t see color as a barrier to success.

Now we have a professor who is drawing parallels between the looting in Ferguson and the Boston Tea Party and citing “white privilege” as a reason to excuse criminal activity rather than understanding the need for protest. The professor even wrote on his blog that “The tragic event of the killing of Michael Brown in Ferguson, Missouri have led to protests and rioting against police brutality. It brings to the surface (again) the institutional racism that has always been in our country.”

Are these the lessons that we should be teaching our nation’s young people? What is being left out of these syllabi are the topics of personal responsibility and the fact that there is no need for violent protests or looting as a form of grieving. How does one grieve by looting a store and stealing things? Retaliating against authority is a choice and one that has consequences—the violence on the streets of Ferguson needs to end. If you spend time searching the #FergusonSyllabus you’ll see many examples of educators seeking to perpetuate a narrative of “institutional racism” which only hinders the healing of the Ferguson community.

While we could be debating the militarization of police—instead we are bogged down in debunking the myth of the Left that “institutional racism” has caused the death of Michael Brown. Yet, if they want to focus on “institutional racism” maybe more of a focus should be placed on racial preferences on college campuses. The Left continues to be divisive with their tactics of exploiting race, gender, and class.

The stories coming out of Ferguson in various media reports have been confusing to say the least, with the lead witness in the case apparently falsifying what he saw. It is important to get to the bottom of what happened but it is not necessary to create racial tensions for no reason other than to sensationalize the death of a young man in Ferguson. It seems as though whenever there is a tragedy, liberal progressives make every effort to tout their radical agenda in the media and in the classroom rather than letting a community heal and move forward.